The time-honored custom of backpacking through Europe after college graduation isn’t for everyone. With jobs for recent grads becoming scarce, many students jump directly into graduate school.

The time-honored custom of backpacking through Europe after college graduation isn’t for everyone. With jobs for recent grads becoming scarce, many students jump directly into graduate school. 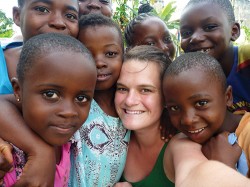 Mollie Willis and her husband, PSU alum Shaun Willis, are spending more than two years in a village in Cameroon.

But some go out into the world to do something they are passionate about.

For Portland State alumnus Shaun Willis, this means spending more than two years in Cameroon volunteering for the Peace Corps.

After studying community health and international issues at PSU—and after an internship with Project Helping Hands in which he worked in health clinics in South Sudan and an orphanage in Tanzania—Willis and his wife, Mollie, set out for Cameroon, in west Central Africa.

They are now four months into their 27-month commitment to the Peace Corps.

Willis can’t remember what drew him to the Peace Corps initially.

“No one else in my family was ever in the Peace Corps—in fact, most of my family still [have] trouble understanding why I am here,” he said in an email. “In truth, the Peace Corps is only a stepping-stone to my larger dreams of working professionally in international development.”

Since arriving in June, Willis and his wife have pioneered several projects to improve the welfare and international exchange of Nkongsamba, the town in which they are stationed.

PSU alum Shaun Willis and his wife, Mollie, are working on several projects with locals in Nkongsamba, Cameroon, during a 27-month Peace Corps assignment.

They helped the Moungo Solidarity Association connect with Kiva—the micro-finance institute that helps the “working poor” receive loans and financial support around the world. According to Willis, the local women’s and children’s association will be the first “nontraditional” partner in Cameroon to become involved with Kiva.

Willis also started a community garden program for local children with hopes of “fostering leadership,” and created a health education public service announcement program on the only radio station in Nkongsamba. His first broadcast will air on World AIDS Day, Dec 1.

Perhaps the most intriguing project Willis and his wife have started, however, is helping the women of Nkongsamba create an Etsy shop where they sell handmade goods like purses, aprons and dresses made from brightly-patterned cloth.

“Cameroon doesn’t have traditional ‘jobs’ like we know in America. If you are considered employed, that means you work for the government,” Willis said. “Other than that, it is mostly bars and restaurants that are family-owned and staffed—everyone else is selling what they can on the streets to make a living.”

After learning about this economic lifestyle, Willis and his wife contacted a small group of women they knew would be interested in selling their crafts but who had not found any market in their local communities.

“We knew how much our friends and family at home value works such as these, as well as supporting independent artisans, so after doing a little research we found that Etsy would be a viable option for them to broaden their market and improve their family status through the generated revenues,” Willis said.

While the Etsy shop has only a few items right now, Willis hopes to see it grow as the project gains visibility and the women become adept at running an online
business. With luck, the endeavor could become a sustainable source of income for the women and their families.

These projects are noteworthy for Peace Corps volunteers who have only been working on site for four months, especially since no volunteers had been posted there before.

“Because…all of the projects are still in their infancy, we struggle with how to
cultivate them in a sustainable way,” Willis said.

At the same time, Willis has had to adjust to life in Cameroon, which means washing laundry in a bucket and buying food for dinner by going down to the local markets—and in Nkongsamba, public transit is really just mass hitchhiking.

“We often find it takes much longer to do the simple things that we always used to take for granted back home,” Willis said.

Lucky for him, he has Mollie. After meeting in the Mercy Corps in 2008, they married in 2010. To volunteer for the Peace Corps as husband and wife, however, a couple has to be married for at least a year, so the Willises had to withdraw their applications and resubmit them after the wedding.

“I never expected to find someone as crazy as I was about the idea of living in random villages in Africa and teaching health or English classes, but I did, and I am forever grateful [for] that,” Willis said.

Dedicated to their work and to each other, the couple will continue to live in Cameroon, teaching English, HIV education and community economic development until August 2014.

While the Peace Corps isn’t for everyone, Willis believes it is a good way to break into the industry of international development and test the waters of a field that is very different in practice than it is in the classroom.

“I am sure that I will achieve many new levels of personal growth while being here, and hopefully come away with a newfound sense of empowerment and direction in my life,” Willis said.

So others can follow along on their adventures, Willis and his wife manage a blog detailing their experiences in Cameroon. Visit 27 months incameroon.wordpress.com.

Rumble in the concrete jungle

Another successful season for Vikings