By now it’s cliche to proclaim that “comics aren’t just for kids anymore.” Especially in a city like Portland, home to publishers like Dark Horse Comics, Oni Press and Top Shelf Productions, comic books have long since proven themselves above petty genre distinctions.

By now it’s cliche to proclaim that “comics aren’t just for kids anymore.” Especially in a city like Portland, home to publishers like Dark Horse Comics, Oni Press and Top Shelf Productions, comic books have long since proven themselves above petty genre distinctions. 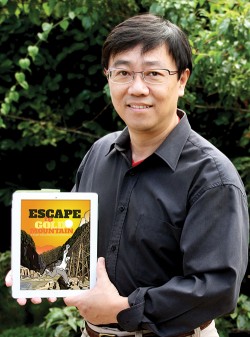 Comics are a medium for art, and whether that art includes contemplative slice-of-life autobiographies or grown men shooting lasers at each other remains completely up to the creators.

David H.T. Wong saw the graphic novel format as an opportunity to connect to readers with a sensitive, specific story by using the universal language of sequential art. He’ll be coming to Portland State to share his new nonfiction book, Escape to Gold Mountain: A Graphic History of the Chinese in North America, on Tuesday, Nov. 13.

“Escape to Gold Mountain is based on the interviews that Wong conducted with his family about their experiences as immigrants to North America, and also their ancestors,” said Jennifer Abel Kovitz, Wong’s publicist. “He also delved deep into the archives and has sketched a lot of things based on photographs that you can see in old newspapers and the archives. It’s the first time it’s ever been done, and he’s done it in a really accessible way.”

Wong’s family history in North America dates back about 150 years. He grew up in Vancouver, British Columbia, with a strong desire to be a cartoonist. Practicality won out, however, and Wong ended up with a career as an architect. Six years ago, he sold his firm and decided to set out on a more personally meaningful pursuit.

“About 10 years ago my father passed away, and previous to that he had really wanted me to go with him to go visit our ancestral village in China,” Wong said. “I thought that maybe I should start following through at what my father wanted me to look at.”

Further inspiration for the graphic novel came not from the past but from the next generation. After one of their weekly visits to the local library, Wong and his children brought home a graphic novel called Fagin the Jew.

The book, a retelling of Charles Dickens’ Oliver Twist from the villain Fagin’s perspective, captivated Wong with its beautiful artwork and in-depth storytelling. He sought out more work from the book’s legendary creator, Will Eisner, who is generally known as the father of the graphic novel.

Wong admits that his career as an architect played a big role in the creation of Escape to Gold Mountain.

“Good design, whether it’s architecture or even poetry or music—there’s a different structure to it,” Wong said. “Some people call it rhythm, and other people just call it a good narrative. A good story is told by good design. I think that being an architect, I guess a creative person, it really helped me organize how the story should be told.”

That story proved to require quite an effort to tell with proper accuracy. Though the comics format provides an accessible inlet for all ages to partake in, Wong ran into some trouble after resolving to remain faithful in the visual aspect of history.

“I found that the whole nonfiction of it really drove me crazy, because it had to be real,” Wong said. “To write words is difficult, to make sure it’s accurate, but trying to draw pictures…the clothing had to be accurate, the cars had to be accurate, the watches they wore, the streetlamps, the buildings. That research took two and a half years before the actual drawing began.”

Escape to Gold Mountain chronicles the Wong family’s tumultuous journey through an era of discrimination and heartbreak starting in the 19th century. Chinese immigrants coming to North America at the time faced a harsh environment of racism and subjugation, which worsened with government legislation.

Three years later, the fee was increased again, to $500, an incredible amount of money at the time: equivalent to two years’ salary for the average Chinese immigrant. Immigrants from China were banned altogether from the United States in 1882.

PSU’s Confucius Institute and the Chinese Friendship Association of Portland present
A book talk and signing by David H.T. Wong, author of
Escape to Gold Mountain: A Graphic History of the Chinese in North America
Tuesday, Nov. 13, 6:40 p.m.
PSU School of Business Administration Building, room 190
Free and open to the public

These harsh restrictions split families across the Pacific Ocean. Some came to North America in hopes of finding enough gold to support their families, only to be cut off from seeing their loved ones, possibly for the rest of their lives.

“I think it’s important because we as Pacific Northwesterners live in the part of the world where this history really played out,” Kovitz said. “From San Francisco north to Vancouver, British Columbia, this is where Chinese immigrants were landing first, and this is where they experienced their first encounter with American racism. I think it’s important to remember that Portland was not immune to that at all.”

Wong hopes that his graphic novel will help illuminate a dark part of North American history. If all goes well, that light will help guide Canadians and Americans of all backgrounds going forward, keeping mindful of where they’ve been.

“I think that people have a tendency to repeat the same mistakes over and over again,” Wong said. “We look at human nature; it’s always easy to find blame instead of taking responsibility and taking charge of the situation. Fingers are always pointed at someone else or another group. I would like people to learn that it can lead to some really painful problems later on.”