If you’ve watched football at all this season, no doubt you’ve seen the Dr. Pepper 10 commercial. I’m used to Monday Night Football, with its big truck and beer commercials complete with growling voice-overs and token hair-flipping girls.

If you’ve watched football at all this season, no doubt you’ve seen the Dr. Pepper 10 commercial. I’m used to Monday Night Football, with its big truck and beer commercials complete with growling voice-overs and token hair-flipping girls. 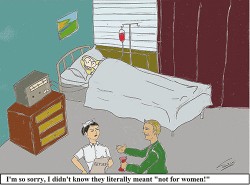 It comes with the territory. If you’re gonna watch three hours of giant men engaging in gladiatorial combat, you’ve got to have the predictable machismo-glorifying accompaniment. Just so all the men watching can feel like they’re equally as manly by drinking and driving what Tom Brady drinks and drives (not at the same time, of course).

Dr. Pepper has taken this stereotyping chauvinism to a whole different level, and without an ounce of pretense to boot. The ad for its new diet drink boldly declares that it’s “not for women.”

Well, for one thing, Dr. Pepper tastes like medicine to me, so I’m not worried I’m missing anything special. It’s not the actual drink I’m bothered about, though. What’s concerning is that Dr. Pepper felt that in order to appeal to men, it had to not only discount but actively and explicitly exclude women.

It’s destructive enough that the representations of masculinity projected everywhere are disgusting, one-dimensional hegemonic constructions, but the fact that a soda company decides it’s funny or clever to state for the record that women don’t qualify as customers is unbelievable.

They might want to take a look at what happened to another recent campaign—ahem, Romney—that refused to acknowledge and cater to women’s issues.

Why the overt gender discrimination? It’s simple. For Dr. Pepper to successfully market a diet drink to men, it’s absolutely necessary to remove its message as far from the “fairer sex” as possible in order to convince men that a 10-calorie drink is manly all the way.

In one version of the ad, muscular men in military fatigues, holding huge guns (hmm), fight off snakes and each other in the jungle. The main character yells at the viewer about “the 10 manly calories” he’s about to drink as he drives wildly around in his off-roader. Then, after crushing the can with one hand, he ends with, “keep the romantic comedies and lady drinks. We’re good.”

Just in case men aren’t fully convinced, the normally recognizable red-and-white Dr. Pepper colors were replaced with what a USA Today report described as “gunmetal grey packaging with silver bullets.” The report also details a Facebook page “with an application that allows it to exclude women from viewing content.”

Someone pinch me. It feels like we’re caught in a 1950s Twilight Zone episode and we can’t get out.

Those old sexist ads of the early-20th century don’t look so ridiculous now. Dr. Pepper (almost) successfully repackaged the “buy your little lady a turkey baster” ad—they just failed in one respect: no barefoot and pregnant women anywhere. Oh, wait! They must have been at home watching romantic comedies.

Dr. Pepper achieved the double-whammy: the degradation of both men and women in a single one-minute time slot.

In these ads, the men look like wild-eyed buffoons so entirely insecure in their masculinity that they require the trappings of war to justify their 10-calorie taste.

Any woman—like myself—watching her favorite team hears loud and clear that, frankly, shouldn’t she be watching a soap opera?

It’s often said that only women feel the effects of a misogynistic, patriarchal society. But ads like these explicitly confirm the sad truth that the warm, fuzzy capitalistic blanket wrapped so tightly around us all serves only to perpetuate stereotypical depictions and standards of both genders. Problem is, that blanket’s so comfortable and inviting we forget how suffocating it really is.

Yeah, we get it all right. It’s just not funny.