With a record below .500 to start the season, the Portland Trail Blazers are, technically speaking, losers. And yet it doesn’t feel that way.

With a record below .500 to start the season, the Portland Trail Blazers are, technically speaking, losers. And yet it doesn’t feel that way. 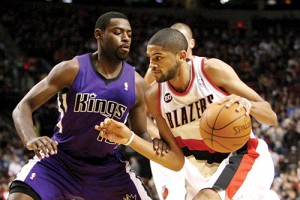 Rising to the challenge: Nicolas Batum will take on a larger role for the Blazers this year in a tough Northwest Division.

Point guard Damian Lillard has thus far actually managed to exceed the unfairly high expectations placed on him, establishing himself as the league’s most impressive rookie in the early going. All-star forward LaMarcus Aldridge has played like one and is living up to his team captain designation. Shooting guard Wesley Matthews is hitting jump shots when the teams needs them and swingman Nicolas Batum is as dynamique as ever.

With some surprisingly solid performances right out of the gate, Blazer fans could be forgiven for jumping to playoff-contending conclusions. But the fact remains that this team is still very much in the midst of the rebuilding process. The Blazers are the league’s fifth-youngest roster and its fourth-least experienced, a combination which tends to produce intermittently exciting but ultimately mediocre campaigns. And they have indeed shown many of the deficiencies that were expected of them. The Blazers currently hover around the middle of the pack in team scoring but are near the bottom in defense, not a good sign for the team’s long-term prospects this season.

But before you despair, Blazers fans, consider their competition thus far.

The Oklahoma City Thunder, Dallas Mavericks and Los Angeles Clippers all beat the Blazers by double digits. “Dare to dream,” right? Actually, yes, I dare, because that same Portland squad also took down Kobe Bryant, Steve Nash, Dwight Howard and the reloaded Lakers on opening night at the Rose Garden. Then they traveled to Houston and overcame a resurgent Rockets team led by new arrival James Harden, one of the NBA’s most dangerous offensive threats.

Lillard, the sixth overall pick in this year’s NBA draft, is a familiar name for
Portland State basketball fans. Lillard played his college ball at Weber State University, where he made a habit of manhandling the Vikings—and the rest of the Big Sky Conference—during his four years there. NBA scouts and analysts were skeptical, though, about how well he would transition to the pros; they couldn’t help but recognize the big-fish-in-a-small-pond element of those college stats, and Lillard’s
reputation as a “score first” point guard left many doubts about his ability to direct an NBA offense.

Lillard is silencing his critics, at least for now—he is currently tops among rookies in both points and assists, and the Blazers’ overall turnover rate is one of the lowest in the league.

Aldridge is also off to a strong start in his seventh season, embracing his role as the Blazers’ team leader. The franchise forward is good for about 20 points and eight rebounds every night, taking some of the pressure off his inexperienced supporting cast. J.J. Hickson has come out as the team’s leading rebounder, and Batum is doing a little bit of everything, expanding his repertoire on the offensive end while continuing his always exceptional defensive play. Batum will be especially crucial to the team’s success this season, as the Blazers’ roster is built to score in transition and any defensive struggles will make it difficult to do so.

The task ahead is not an easy one. Even if they overachieve, Portland plays in what will arguably be the best division in the NBA this season. The Thunder are expected to remain atop the Northwest, and the Nuggets and Jazz will likely dominate the Blazers down low. Still, the Rip City faithful have rising stars to root for in Lillard and Batum, and for the first time in a while, a bright future to dream about. Dream on,
my friends.