Beyond the Black Rainbow, which is currently playing at 5th Avenue Cinema, was released in 2010, but everything about the film suggests that it was made in the 1960s or ’70s. The lighting, clothing, hairstyles, music, setting and even the atmosphere of the movie are all reminiscent of those LSD-influenced decades of the 20th century. 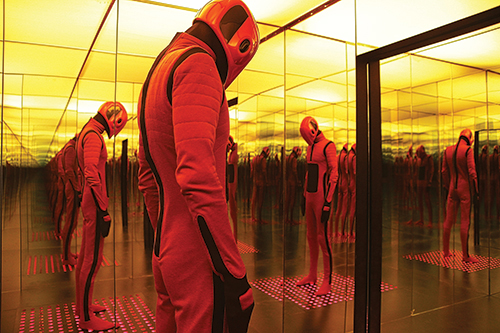 Head trip: A forlorn cyborg stands alone in what’s either a photo from the film Beyond the Black Rainbow or Daft Punk’s dressing room. Photo courtesy of Magnet releasing.

Beyond the Black Rainbow, which is currently playing at 5th Avenue Cinema, was released in 2010, but everything about the film suggests that it was made in the 1960s or ’70s. The lighting, clothing, hairstyles, music, setting and even the atmosphere of the movie are all reminiscent of those LSD-influenced decades of the 20th century.

A word of caution: After extensive research, the general consensus seems to be that people either love or hate this movie. There is very little middle ground—this film certainly isn’t for everyone.

One of the major complaints against it is the seeming lack of plot. This is a sensory film. It was not really made to tell a story. Rather, the writer and director, Panos Cosmatos, chose to show off his aesthetic talents in his premiere piece. As a medium, film is primarily used to visually tell stories—but Cosmatos is concerned with telling artistic rather than entertainment-style stories.

After all, there are a limited number of stories to tell—man vs. man, man vs. nature, man vs. woman, man vs. society, etc.—but the number of ways to portray a story is as infinite as the human imagination. Beyond the Black Rainbow’s plot is admittedly thin and takes a long time to develop, but it does exist.

The movie’s plot revolves around a young girl attempting to escape her lifelong imprisonment in the Arboria Institute. The film is set in the year 1983, and the institute helps people to reach their full happiness potential through a “unique blend of benign pharmacology, sensory therapy and energy sculpting.” The film’s antagonist, Dr. Barry Nyle, has made it his goal to guide his telekinetic patient, Elena, to her full happiness potential.

One of the most impressive things about Beyond is that it was all edited in-camera: Any of the lighting or effects that are seen on the screen were done on set, not on a computer. The laborious in-camera editing process makes the technical and artistic skills showcased throughout the film especially impressive.

Beyond the Black Rainbow uses the ever-so-generic blue and orange color palette for the majority of the film. After a certain point, however, yellow and green become the lighting focal points.

Cosmatos takes pains to light the film distinctively. The two main characters, Dr. Nyle and Elena, both seem to have their own specific lighting color palette, creating extra contrast between the characters.

Sound plays a crucial yet subtle role in giving Beyond its unique tone and feel. While the music isn’t always melodic or beat-oriented, the synthesized background sound helps to build suspense and give the viewer a sense of claustrophobia and terror at some points, a sense of freedom and adrenaline at others. Few recent films have used minimalistic synthesizers so subtly or effectively.

The acting in Beyond is also noteworthy: Only about four characters have dialogue, and three of them are relatively inconsequential. Michael Rogers (Dr. Nyle) had only ever appeared in small TV roles, and was given the opportunity to prove his ability as the bad guy. He does not disappoint, remaining cool, calm and calculating throughout the film. This makes Rogers’ portrayal of Dr. Nyle even more terrifying.

Eva Allen (Elena), who also had worked in smaller TV roles, was assigned the difficult task of allowing the audience to sympathize and also be intimidated without speaking a single world.

She’s not entirely mute, as she is heard making grunts and distressed sounds throughout the movie; she just doesn’t communicate verbally. Elena’s entire mental and emotional state is shown through Allen’s facial expressions and body language. An impressive feat.

Not everyone will be able to stomach—let alone enjoy—this movie. It can seem that the story drags on, like 2001: A Space Odyssey with a slower, thinner plot. To reiterate: This is a sensory piece.

Beyond the Black Rainbow goes nowhere fast, but the ride to the finish line is absolutely gorgeous. This is Cosmatos’ first film, inspired by the VHS covers of horror movies his mother wouldn’t let him rent.

If Cosmatos is able to develop his storytelling capabilities, he may have the potential to be a brilliant filmmaker or, at the very least, enjoy a loyal cult following.