If you are looking to get in and out of the cold while enjoying some exciting theater this term, you will want to check out what is going on in Portland State’s Department of Theatre
and Film. 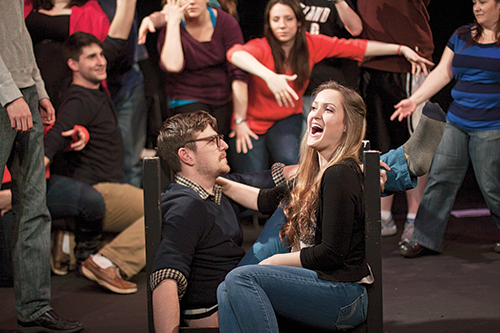 UP CLOSE AND PERSONAL: Andrew (Andrew S. Miller) and Ya Ya (Shawna Holt) recline beneath “a hundred slender young chestnut trees” during a rehearsal for Limonade Tous les Jours. Photo by Miles Sanguinetti.

If you are looking to get in and out of the cold while enjoying some exciting theater this term, you will want to check out what is going on in Portland State’s Department of Theatre
and Film.

In addition to the main stage production of The Servant of Two Masters, the department will also hold its Second Season: Play Reading Series and Festival of Short Plays events. The winter term theater season kicks off with a staged reading of Limonade Tous les Jours, which opens Jan. 17 in Lincoln Performance Hall.

Written by Charles Mee and directed by department adjunct professor Lorraine Bahr, Limonade tells the story of Ya Ya, a young Parisian cabaret singer, and Andrew, an American in his 50s, who come together seemingly by chance after each has suffered the pain of a failed relationship.

The two characters could not be more different.

“[Ya Ya] is so open—so impulsive,” said Shawna Holt, a Theater Arts junior who will play the role of Ya Ya in two of the four performances, in an email. (The role has been double-cast, and Holt and fellow actress Victoria Spencer will perform on alternate nights.) “She is the opposite of Andrew’s reserved vulnerability,” she explained.

Holt cherishes the opportunity to play the role of the garrulous Ya Ya.

“The thing that I love about her most is that she follows her heart,” Holt said.

Andrew, by contrast, has been burned by his love of a much younger woman and is withdrawn, clearly afraid to love again. They are an unlikely pair and, as viewers will learn throughout the play, have very few reasons to fall in love with one another…and yet…

Limonade is the first of three theatrical staged readings that will take place in the Studio
Theater this term. These readings are presented as part of the department’s Second Season series, which accompanies the mainstage production.

Unlike a traditional theatrical production, staged readings are usually performed with minimal lights, sets and props, focusing instead on the words of the playwright and the skill of the actors to bring those words to life.

A common misconception about readings is that they are simply actors sitting around reading from a script. The reality is that a reading is itself a form of theater that can be performed in as many different ways as any other type of staged production. One of the other main differences between a staged reading and a full production is that the former tends to have a much shorter rehearsal process.

While most productions will involve six to eight weeks of rehearsal, the rehearsal period for a reading is usually less than 10 days. This fast-paced rehearsal period is something Spencer finds exciting.

“Because things happen so fast, you don’t really have time to slow down, which in its way is really freeing,” Spencer said. “[It] makes the process more relaxing.”

Mee encourages a creative and inventive use of his works. Unlike most playwrights, Mee makes his plays freely available on his website, the (re)making project.

For this reading, Bahr will be incorporating movement elements in the piece. In fact, although the play focuses solely on the two lead characters, the director describes the
production as more of an ensemble piece.

Spencer feels that this will add an element that will make the play even more interesting and entertaining.

In addition to teaching at PSU for the last 13 years, Bahr is a well-known actress, director and playwright who works across Portland. She is the former associate artistic director of the Sowelu Theater, as well as a member of its resident acting company.

Bahr has also worked with theater companies such as Artists Repertory, Theatre Vertigo and Stark Raving Theatre. As a playwright, her works include the Drammy-nominated A Life Alone and the Kernodle Playwriting Award-winning The Great Escape of Charlie Stone.

Bahr is looking forward to bringing this story to PSU audiences. It is her hope that after experiencing this play the audience will walk away “feeling a little more in love with the human race.”