Imago Theatre’s The Black Lizard returns to the stage

In case you were one of the unfortunate people who missed Imago Theatre’s production of Yukio Mishima’s The Black Lizard when it ran last spring, you’re in luck: The show that opened to glowing reviews in May is back to open Imago’s 2012–13 season.

Imago Theatre’s The Black Lizard returns to the stage

In case you were one of the unfortunate people who missed Imago Theatre’s production of Yukio Mishima’s The Black Lizard when it ran last spring, you’re in luck: The show that opened to glowing reviews in May is back to open Imago’s 2012–13 season. 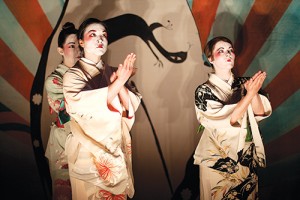 Critics and audiences were mesmerized by the production’s roller coaster ride of suspense, drama, intrigue and eroticism (there is nudity). The Vanguard’s own Joshua Hunt said the production “perfectly captures the vitality, depravity and eroticism of Mishima’s intense vision,” while The Oregonian called it “a wonderfully strange hybrid, constantly blending or shifting between stylistic conventions.”

The Black Lizard, which made its English-language premiere last spring, was written by prolific Japanese playwright Yukio Mishima and translated for the Western stage by Mark Oshima and Portland State Professor of Japanese studies Laurence Kominz.

Prior to writing this play, Mishima was predominantly a formalist playwright in Japan. With The Black Lizard, which Mishima adapted from the classic 1961 novel by Edogawa Rampo, he chose to break his own rules and create a hybrid of traditional Japanese kabuki and modern Japanese theater. 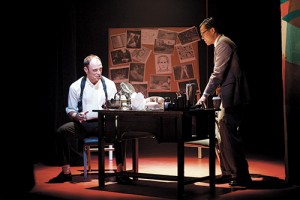 The play is a crime drama that incorporates various elements of traditional kabuki such as masks and dance interludes. It follows the intrigue that ensues between Black Lizard (Anne Sorce), a master jewel thief, and hard-boiled private investigator Kogoro Akechi (Matt DiBiasio), who is determined to stop her from stealing the prized Star of Egypt diamond.

When Black Lizard kidnaps the daughter of the wealthy jeweler who owns the diamond, things go awry, taking the audience on a spellbinding journey of danger, suspense and more than a little deception. 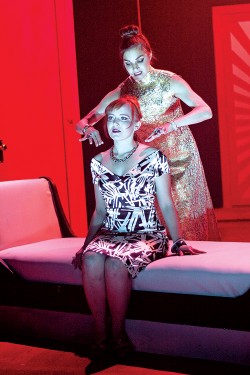 An obsession with beauty is one of the play’s primary themes. Kominz noted that the culture of Mishima’s Japan placed its highest value on things of beauty, but within that beauty was a built-in mechanism for societal cruelty that made the two inseparable.

With The Black Lizard, Mishima expresses his own personal—as well as the cultural—obsession with beauty, and the often heartless world in which beauty exists. In the play, Black Lizard “murders beautiful people in order to satisfy an impossible obsession: to possess and preserve beautiful objects that will not decay over time,” Kominz said.

Translating a play in any language is challenging, but particularly so when the play is bridging two very different cultures and theater styles. For Kominz, the key to successfully translating this play was to evoke the same response from a Western audience that it gets from Japanese audiences. That requires a very careful study of the language and knowledge of the two cultures.

The translation was originally part of a book of Japanese to English translations that Kominz published. It was then brought to the attention of Imago cofounder and theater director Jerry Mouawad. Imago Theater, which was founded in 1979 by Mouawad and Carol Triffle, “aims to place form and design at the forefront of theatre creation and infuses each production with an idiosyncratic physical energy,” according to its website.

Over the last three decades, Imago has established itself as one of the premier experimental theater companies, not only in Oregon but nationwide. According to Mouawad, The Black Lizard lends itself very well to Imago’s experimental style. Mouawad has worked tirelessly to stay true to Mishima’s original intent and spirit, creating his own “Imago Kabuki” theater.

Audiences can look forward to a few changes in this production, like new scenic elements and a couple of cast changes, though the two lead actors, Sorce and DiBiasio, are back to reprise their roles. Critics have called Sorce’s performance “somehow sympathetic even at her most twisted and cruel,” which is one of the play’s primary intentions, according to Kominz.

“In the end of this play, if you find that you sympathize with the Black Lizard, then this production will have realized one of Mishima’s goals in many of his works—to allow or compel readers and audience to enter into the psyche of a disturbed, warped or sick human being and then empathize and recognize how alike we are to these pathetic or dangerous social misfits,” Kominz wrote in an email.

Whether you are seeing it for the first time or, are a repeat customer one thing is assured: You are in for an exciting night of theater.