Ridley Scott’s Prometheus is an insult to science, religion and the viewer’s intelligence

You’ve probably heard Patton Oswalt’s joke about time machines. Faced with the choice to alter human history, Oswalt confesses that he’d instead “go back to the summer of 1993 and kill George Lucas with a shovel” to prevent the Star Wars prequels from happening.

Ridley Scott’s Prometheus is an insult to science, religion and the viewer’s intelligence

You’ve probably heard Patton Oswalt’s joke about time machines. Faced with the choice to alter human history, Oswalt confesses that he’d instead “go back to the summer of 1993 and kill George Lucas with a shovel” to prevent the Star Wars prequels from happening.

If Oswalt had seen Prometheus before writing that joke, the target for his nerd rage might have been less obvious. Prometheus (which ought to have been titled Alien: The Phantom Menace) makes Ridley Scott a worthy contender for time-travel assisted assassination to prevent crimes against cinema.

Why review Prometheus months after its release? Because I’m still pissed. I’d like to go back in time and abort this movie with the space crew’s own abortion machine.

Since that’s not possible, I’ll have to settle for writing about how Prometheus isn’t just a bad movie, it’s the worst possible movie. Calling Prometheus a “science fiction” film is a disservice to the genre.

The best artists help their audiences engage with complex social issues. Good movies capture a zeitgeist—that’s why there’s so much scholarly discussion about horror films, even though they’re usually not as highbrow as sci-fi.

Science fiction has traditionally worn its intentions on its sleeve. Since Mary Shelley’s Frankenstein; Or, the Modern Prometheus (its full title)—arguably the first science fiction novel—sci-fi has had a long tradition of expanding public discourse around the issues of science and ethics.

It’s no coincidence that the Prometheus at issue here is ripping off Frankenstein’s subtitle. Prometheus and its creators make a point of advertising that this film is continuing a proud tradition.

That’s why it’s so dangerous.

Unlike its predecessors, this stain on a genre is, at its core, anti-science. It deifies the idea that science is a religion, and it does so by pretending to be a run-of-the mill genre flick, which is precisely what makes it so offensive.

I’ll address my philosophical qualms with Prometheus shortly. But first, I’ll point out how this disaster dug its own grave by ripping off movies that were everything it wanted to be—minus integrity and, you know, actual science.

Prometheus is a complete hack film. Its best sequence—Michael Fassbender’s creepy android riding a bicycle while shooting hoops—could have been straight out of Moon, which far more persuasively details the nuances between humans and artificial intelligence and the staggering isolation of space travel. If you’ve read interviews with Ridley Scott and screenwriter Damon Lindelof, you’ll notice that one of their big themes is the interaction between creators and their subjects.

What’s hilarious about these interviews (beyond Ridley Scott’s implications that in the Alien universe, Jesus is an alien—no, I’m not kidding) is that they seem to think that their ideas about human-robot interaction are somehow original.

Guys, you already ripped off Frankenstein’s title. Are you so dense that you don’t realize you ripped off its fundamental premise? Or are you just hoping people won’t notice that you’re remaking Frankenstein in space?

Michael Fassbender’s obsession with Lawrence of Arabia isn’t fooling anybody. A gold-plated turd is still a turd, and all the cool-looking special effects can’t hide the fact that this movie is an empty, soulless vehicle for Ridley Scott’s ego, and that makes me hate him more than Patton Oswalt hates George Lucas.

As for Prometheus’s “big questions” about the origins of humanity and our place in the grand scheme of intelligent life in the universe: I already watched a science fiction film that dealt with human/alien interaction. It had actual science in it, since it was based on a book by Carl Sagan. Its religious characters actually studied theology. That movie is Contact, and you should watch it instead of Prometheus.

I’ve established that Prometheus is a lame movie. Now, I’ll explain why it’s actually way worse than that. This movie is committing crimes against science fiction and intelligent moviegoers everywhere. These are deep transgressions, folks. Anonymous should be protesting this movie way more than they protested Scientology, because it’s way more insidious.

Prometheus is fundamentally anti-science. At the same time, it’s in favor of an approach to religion (and reality) that makes disagreeing on objective facts a matter of opinion. The idea that people can responsibly “choose to believe” whatever they wish is an insult to religious people and to atheists alike. It’s as offensive as saying that there are good reasons to believe Earth is actually 4,000 years old.

Prometheus mocks scientists and the scientific method at every opportunity. There seem to be no procedures for conducting experiments on board the ship. A crew member removes his helmet on an alien planet because the atmosphere is breathable on his computer printout—he tells his horrified crewmates to “have a little faith.”

Every scientist on board is a complete idiot. I’m hard-pressed to think of a slasher flick where the characters are this stupid. Even the most mindless, formulaic horror films don’t completely insult the viewer. There’s at least one character who tries to escape the inevitable by behaving rationally. It’s part of what makes the carnage so fun to watch.

In contrast, everyone who dies in Prometheus deserves a Darwin award. (Spoiler alert: Charlize Theron’s character runs in a straight line to avoid being crushed by a rolling object. Hasn’t she studied Newtonian mechanics? Hasn’t she seen Indiana Jones? Run sideways, you idiot).

Did I mention that the so-called “scientists” in Prometheus pinpoint the exact location of alien intelligence by connecting the dots between stars in cave paintings? If I haven’t already, it’s because I still can’t believe that Ridley Scott actually made an Alien movie that rips off Chariots of the Gods.

At least George Lucas doesn’t treat the scientific method with such contempt. At this rate, Ridley Scott’s next movie will advance pseudoscientific “hypotheses” that demonstrate that climate change isn’t anthropogenic. If Patton Oswalt ever gets his time machine, I hope he gives George Lucas a stay of execution.

The Phantom Menace might have hurt the child in all of us, but Prometheus actively glorifies stupidity—and that hurts our whole society. 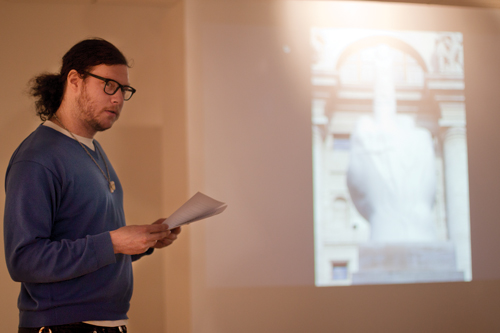