After recently releasing Similes, an album full of surprises for the seasoned Eluvium listener, the ambient act consisting of solo artist Matthew Cooper will be kicking off his nation-wide tour with Eric Macey and Charles Buckingham.

After recently releasing Similes, an album full of surprises for the seasoned Eluvium listener, the ambient act consisting of solo artist Matthew Cooper will be kicking off his nation-wide tour with Eric Macey and Charles Buckingham. His new album embodies the same sort of emotional excellence as his other albums, but translated through a new form of expression.

Similes is his first album to utilize the oh-so-exploited verse-chorus-verse formulation, complete with percussion and vocals. Cooper sings for the first time on this new work of art and it might throw you back a few steps.

His voice has that sonorous and shaky appeal found in various bands from the indie movement of the past 10 years, but the lyrics ring true to the essence of Eluvium. It’s refreshing to hear the voice behind years of such profound composition.

“The Motion Makes Me Last” may be one of Cooper’s best songs, not only on this particular album but also over his entire discography. It tastes a little like something tied up and suspended between indie pop¬¬ and progressive ambient—like the saddest of The National and the least electronic of Emilie Simon, all doused in reverb kerosene and set on fire.

His lyrics take on a sort of philosophical obscurity. “When shapes are for looking at, and their colors create my mood, I’m a vessel between two places I’ve never been,” and “Creation is a pathogen, what’s more than subtle in these minds” are delivered in an equally heartfelt, restrained and uncertain way.

Cooper creates all his music alone in his own home studio, where he finds himself unhesitant and unbounded by people or time constraints. In 2008 he released a beautiful collection of sounds called Miniatures on Gaarden Records, under his own name Matthew Cooper, rather than Eluvium.

These recordings originally came to life when Cooper was trying to create an orchestral composition, but he found the life of each instrumental melody too precious to compile them into a complete symphony. Instead he dedicated each track to a harmonic fragment of the greater whole. One can hear traces of Philip Glass and Erik Satie in Cooper’s humble urgency and ease of emotional magnification.

Following the completion of Miniatures, Cooper went on to score the film “Some Days Are Better Than Others” by Matt McCormick. While the short film is self-described as tackling difficult and complex “ideas of abundance, emptiness, human connection and abandonment,” the soundtrack might be the best part of a film that appears to be an overly dramatic plot pilled in by actors stuttering cliché after cliché.

“I’m a considerably nervous and over-analytical person,” Cooper said. “Sound has always been my respite.”

With music that seems to delve straight into your heart without a moment’s hesitation, Eluvium is surprisingly reserved—someone who seems to slip in and out of existence, who wastes no time on stage performance, who gives, gives, gives himself in the name of ambience. 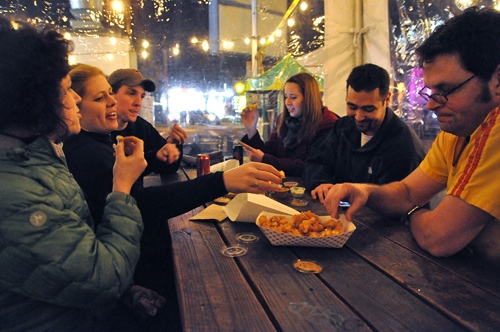 Academic advising: how should it be done?