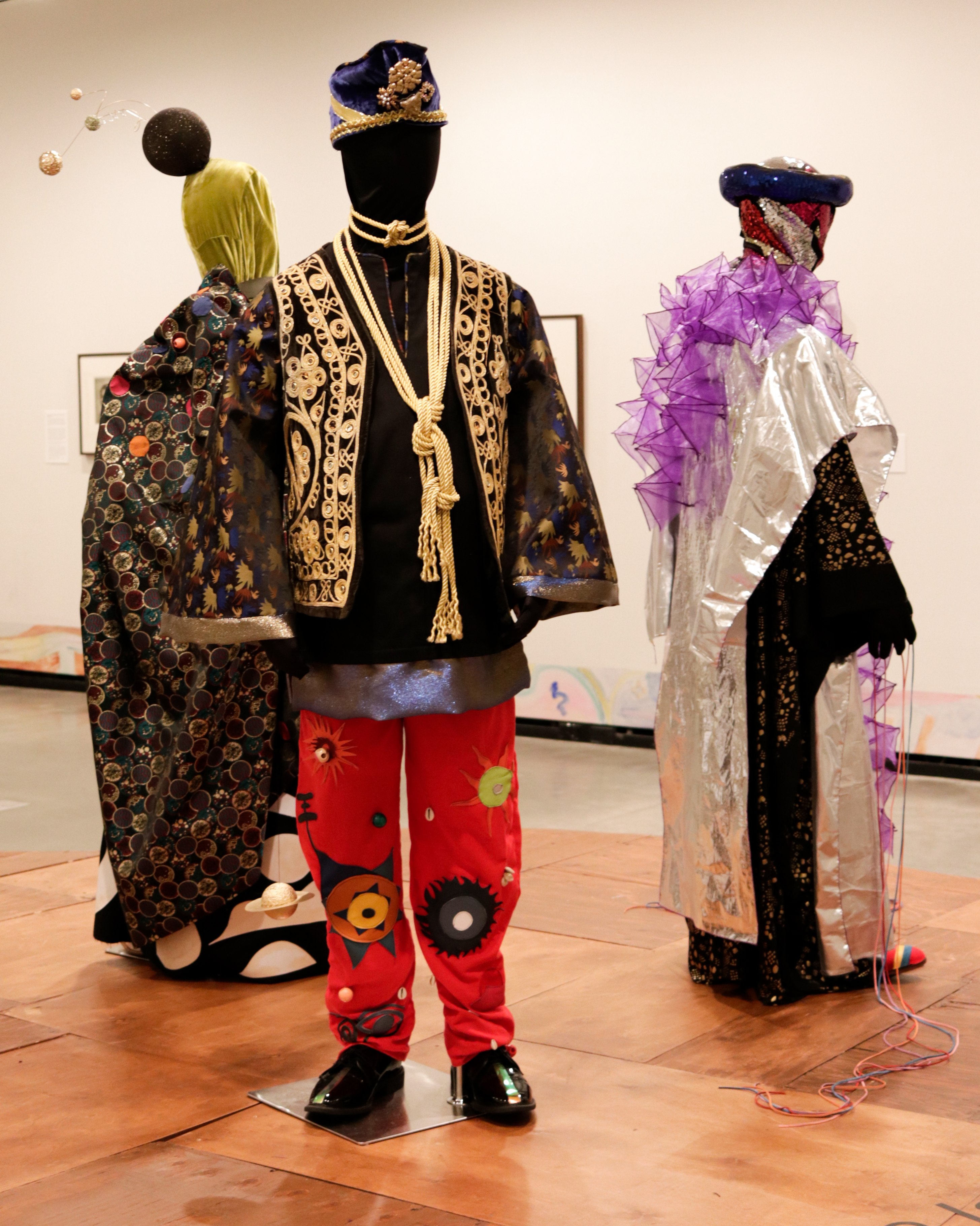 Born Herman Poole Blount, Sun Ra, in all of his prolific and inspired thinking, was a man who explicated both mythicism and reality in every essence of his existence. The afro-futuristic reality he immersively lived—with the help of a rotating collective of musicians and artists called the Arkestra—was one of substantial influence light-years ahead of its time. Sun Ra’s impact never quite hit mainstream during its heyday though revered by many, which is why the Portland Art Museum’s current display holds a particular level of cultural importance.

“If you are not a myth whose reality are you? If you are not a reality whose myth are you?” Such existential questions were pondered by a greatly creative mind and in a way, answered by him as well.

Properly titled “Monuments: The Earth Expedition of Sun Ra,” the exhibit is the last in a five-exhibit series collaboratively curated by Libby Werbel, founder of the Portland Museum of Modern Art and Bethlehem Daniel, Madenna Ibrahim, Mia O’Connor-Smith and Janessa Narciso of the Deep Underground (DUG), an arts and music collective with a central focus on local talent of color. The title of the exhibit is key—not only does it reaffirm Sun Ra’s otherworldly convictions of himself (by furthering his notion of coming to Earth from another planet), but it also communicates the perceived authority in the word “monument.”

“Not long after its conception, America began creating monuments to commemorate those who the politically affluent deemed as influential contributors to American life…Let us ask ourselves, what are the new monuments we wish to build?” DUG contemplated in a statement presented alongside the exhibit. “Who are the artists, thinkers, and activists we wish to exalt & preserve for the future?”

In questioning this, DUG and Werbel sought to commemorate Sun Ra as a musician, artist, scholar, philosopher and overall paramount figure of Black expression and liberation. Along with the aid of Mississippi Records’ Eric Isaacson, the exhibit is the largest Sun Ra reflective collection yet, offering a multifaceted array of artifacts and memorabilia which included the first live Portland performance by the Arkestra in 29 years. The exhibit in its entirety is captivating, but it’s the individual relics that truly communicate Sun Ra’s place in time and Black history.

A gold 3D bust of Sun Ra’s head and headpiece—created using 2D historical prints—greets visitors as they walk into the 4th floor exhibition. The bust introduces a regality that carries on throughout the rest of the collection. It’s especially present in the personal portraits, film stills and posters from his 1974 film Space is the Place. The posters and film stills depict Sun Ra, saxophonist John Gilmore and other members of the Arkestra donning both traditional and futuristic Egyptian garb at various moments throughout the film, which involves Sun Ra landing in Oakland during the height of the Black Power movement and rescuing his people from the subsequent racial turmoil.

These movie pictures lead into the video installation room, which offers a whole other beast of visuals to take in.

The room itself is pretty minimal—a couch, a few wooden chairs, a glass display holding a spread of his “Brotherhood of Light” tarot cards and a projection of the film installation—but there’s one main takeaway that gives context into the video and Sun Ra’s thought process. “I’m not a part of history, I’m more a part of mystery” is marked across the wall upon entrance, burning itself into your brain as you sit to take in the installation.

That mystery begins to unfold as superimposed images from the inside of a kaleidoscope, the sun, the moon, Saturn and other planets make up the backdrop of performance clips, snippets of interviews and pulled footage of the mistreatment of Black people during the Civil Rights era in the video. Splicing the positive energy of Sun Ra and the Arkestra while playing with shots of Black people getting hosed down by police is intentional, providing a juxtaposed insight into how Black people were perceived and treated during that time versus how he chose to perceive the Blackness of himself and others in his community.

Not everything in the exhibit gives off that kind of weight. The next room holds most of the musical and personal artifacts in the exhibition. Glass cases hold photographs, a numerical and sacred geometry-inscribed cymbal and handcrafted instruments like his space harp and frankiphone. One wall is taken up by 80 of his 270 records. Another displays a mock business card design for El Saturn, one of the first Black-owned independent record labels he started with his business manager Alton Abraham and James Bryant, hanging in between a handmade bronze medallion and the handwritten application Sun Ra submitted to NASA. In the center of the room was a platform resembling that of a spaceship, holding three mannequins all dressed and stylized in garments that once adorned Sun Ra. Each one was just as colorful, glittery and flashy as the next.

The last attraction in the exhibit is the listening station, tucked away in a miniature room with all black walls. Placards introduced the sounds that automatically blare from the headphones, which included a live recording of the last Sun Ra and the Arkestra Portland performance at the Pine Street Theater in 1988. “When Sun Comes Out,” “Angels and Demons at Play” and “When Angels Speak Love” are also up for open ears.

A walk through “Monuments” proves how different Sun Ra’s actuality really was. Everything included in the exhibit is like an afrocentric acid trip experienced through the eyes of an eccentrically visionary soul. We are all only visitors and if anything, this peering into Sun Ra as a being helps to show that.