Portland State graduate student Jim “Pong Wolfgun” Kelsheimer was first arrested for civil disobedience in Philadelphia in the summer of 2000, the year that marked the beginning of his three-year-long travel stint across the country, from riot to rally to protest. 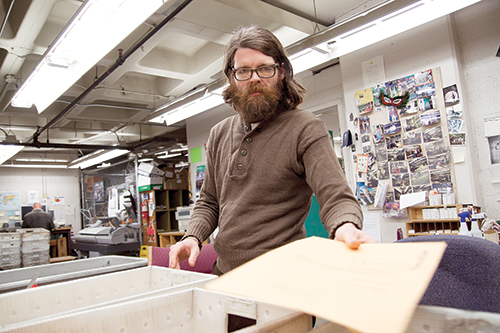 Jim Kelsheimer, who goes by the name “Pong Wolfgun,” sorts mail in PSU’s receiving center, where he works. Photo by Adam Wickham.

Portland State graduate student Jim “Pong Wolfgun” Kelsheimer was first arrested for civil disobedience in Philadelphia in the summer of 2000, the year that marked the beginning of his three-year-long travel stint across the country, from riot to rally to protest.

Along with 390 other people, Kelsheimer was arrested while protesting against capitalism, the death penalty and a variety of other issues at the Republican National Convention.

Kelsheimer was detained for 17 days, during which he participated in a hunger strike and jail solidarity—meaning he withheld his real name and would only identify himself as “John Doe.”

He called it the most life-changing protest he has ever attended.

“It was and is traumatic,” said Kelsheimer, who is still processing his arrest, despite the fact that it occurred 12 years ago.

As a result of his incarceration, Kelsheimer said he endured a near mental breakdown and that, because of his experience with police brutality, he believes he has post-traumatic stress disorder.

“[Some of us] were held in a maximum-security prison for three days,” he said. “There were bunk beds with neon lights that stayed on for 23 hours a day, and you were allowed half an hour outside each day.”

In an article published by the American Civil Liberties Union, the late Stefan Presser, legal director for the ACLU of Pennsylvania in 2000, said many violations of protestors’ rights occurred during the 2000 RNC.

Kelsheimer said his charges were eventually dismissed because of a lack of evidence.

Before participating in rallies and riots, Kelsheimer was raised in an abusive home on various military bases. He’s been anti-military since elementary school.

“When I was in the fifth grade, my mom married a GI and we moved to an army base right before the first Gulf War,” Kelsheimer said. “I would wake up to [the sound of] attack formation helicopters and army cadence, which is really brutal, like ‘We are gonna kill them Commies!’

“I got to do things like shoot machine guns at decommissioned army vehicles,” he continued. “[My stepdad was] like, ‘Hey, you’re a boy, you’re going to join the military just like your stepdad.’ I was like, ‘No.’”

Though his arrest in 2000 was his first for civil disobedience, Kelsheimer is no stranger to riots or riot cops.

For three years, from 2000 to 2003, he hitchhiked, hopped freight trains and used a fake Greyhound bus pass to travel all across the country, from protest to protest, from Louisville to Detroit, from Toronto to Minneapolis.

“I have watched footage of myself [on YouTube] getting shot [with rubber bullets and a tear gas canister] in Quebec City and arrested,” Kelsheimer recalled. “Rubber bullets are, like, four inches solid—they’re rib-crackers.”

“My friends have been telling me for a while that I have PTSD. Last night, literally, I acknowledged, yeah, I do have PTSD,” he said.

One video from a 2002 demonstration in Quebec City features protesters in gas masks tossing tear gas canisters back at lines of retaliating cops. In another scene, a young man aims a slingshot at police while other protestors throw a large piece of chain link fence at the cops, who in turn shove people to the ground and pin them to the pavement with their feet.

Most of the protesters, who appear to be quite young, scream and resist as they’re being arrested.

“I’m not bragging about that stuff,” Kelsheimer said. “I was a very different person back then. I’m sure all the violence around me [as a child] didn’t [give] me the tools to process things, other than with anger.”

After years of traveling, he unintentionally landed in Portland around 2003. He attended PSU and got a bachelor’s degree in German.

Currently, he is enrolled in the master’s program in teaching.

These days, Kelsheimer still identifies as an anarchist, and attends and organizes activist meetings and rallies often, but he said he would now like to focus less on demonstrating and more on building community.

“Building community is a lot more dangerous to the state than rioting,” he said. “Forming networks with the people on your block to take care of each other will assist in the collapse of the state.

“If we can figure out how to take care of each other and the earth in nonoppressive ways, the state will serve no purpose in our lives.”

You can see Kelsheimer out on the town with his DJ group, Cascadia Soul Alliance. They have a show at EastBurn every first Friday of the month, and will appear Saturday, Jan. 19, at the Mark Woolley Gallery at the Pioneer Place Mall.

Look Up and See Green