Homelessness is an ongoing and visible issue in Portland, and the youth are no exception. But Portland State’s master’s program in architecture is trying its hand at helping out. 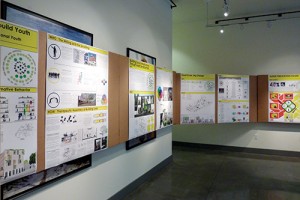 Courtesy of PSU Department of Architecture

ARCHITECTURAL PROPOSALS that combat the issue of youth homelessness are on display at Mercy Corps.

Homelessness is an ongoing and visible issue in Portland, and the youth are no exception. But Portland State’s master’s program in architecture is trying its hand at helping out.

Professors and graduate students are applying design principles to the issue of youth homelessness and working together to kick-start new innovations and social solutions throughout the broader community.

After nearly a year of research and development, the graduate program is bringing an exhibition to the community that will display its findings and proposals. Titled Rethinking Shelter, the exhibit will show as part of Mercy Corps’ ongoing Design with the Other 90 Percent: Cities event. The exhibit will also include a lecture by visiting professor and architect Teddy Cruz on Friday, Oct. 5.

“There are some traditional ways to deal with homelessness that are very powerful, like building housing, but there needs to be more innovation to address the problem, because the problem’s growing, and it’s more complex than just housing,” said Sergio Palleroni, associate professor in the Department of Architecture. “It’s also getting harder to finance housing, because the federal government is giving less funding for housing.”

The exhibit, Palleroni explained, will feature research by graduate students on the issues underlying youth homelessness, as well as the local laws and funding mechanisms currently used to address them. From this research, the students sought to draft proposals for alternate, design-based solutions tailored to the needs of both the affected homeless and the city itself.

“We took on this challenge by working with Outside In, an amazing nonprofit organization addressing teenage homelessness,” Palleroni said. “They helped us look at how we could get funding through the normal funding streams, the regulations of the city. From there, we began to explore innovative ways that housing could be created. Ways that couldn’t be imagined otherwise.”
As an example, Palleroni pointed to a proposal that suggested adapting Portland’s food cart pods for living purposes.

“The carts are small enough that they could qualify as temporary housing under city ordinance, so people could trade out their housing through Craigslist,” he said. “As soon as you found a job and got established, you could transfer the title of it to somebody else.”

The exhibition is the culmination of nearly a year of work by the graduate students, who spent the bulk of the previous winter term in research before drafting their final proposals. The proposals were then polished for professional presentation over the course of the summer term.

“It was a really good studio,” said Lindley Bynum, an architecture graduate student involved with the working process. “We got to understand the bureaucracy around homelessness, how many programs are out there, what’s working and what’s not working. We did an analysis on what could be done differently. We all came up with proposals for [what] funding solutions for housing for homeless youth would look like.”

Bynum worked with 13 other students to research and develop the ideas during the previous year. Their work, she explained, helped to inform the processes preceding the architectural role.

“I think the most interesting thing was that we were looking more at what leads up to the need for architecture, and what sort of social funding streams are necessary to create new types of architecture,” Bynum said. “It was interesting looking at the more experiential things that inform our designs, like funding streams and social structures, analyzing the resources available and how you capitalize on those.”

Over the next few weeks, those proposals will be seen by the public. The professors have also invited the professional design community to critique the work. In the long run, Palleroni and Cruz hope that some of the work presented can be further refined for eventual implementation by interested groups, such as Outside In.

“The design community will join us for a Saturday and spend an entire day designing and thinking about how could the work be employed,” Palleroni said. “We’ll have a series of ideas that we can then exhibit for the next ten days, and we’ll have a debate during Design Week [Portland], an evening where we will discuss with the whole community how design can contribute toward the future of the city.”

According to Palleroni, the Rethinking Shelter exhibit is an important example of how Portland State can interact with the greater community in bringing new ideas to approach traditional problems.

“At PSU, we’re sponsoring a fundamental debate in our society to help the society imagine new possibilities,” he said. “It’s a great role for PSU to be in, to be a sort of forum for change.”