The Student Fee Committee refused to deliberate on the ASPSU budget appeal in Wednesday’s final allocations hearings, saying that the student government failed to submit the appeal on time.

The fee committee, which oversees the allocation of over $7 million in student fees to student groups, first voted 2-3 against discussing the appeal, with one abstaining. The committee then voted 3-2 to deny the appeal request.

According to the committee guidelines, student groups have one week from the time they are initially allocated a budget to submit a written appeal. The Associated Students of Portland State University (ASPSU), the university’s student government, was given an initial allocation on Jan. 26.

"They had until Feb. 2 to submit an appeal," Student Fee Committee Chair Tracy Earll said. The budget appeal, however, was not submitted until their appeal hearing last week.

Those in favor of reviewing the budget appeal argued that the fee committee had made exceptions for other groups who had not submitted their appeal on time. Members who voted to deny the appeal request said that those exceptions had been made for other groups because they were confused about the budgeting process.

Prior to the appeal hearings last week, a fee committee liaison had sent out an e-mail to the groups in his cluster that was intended to explain to them why they had been initially allocated $0. Because of the wording of the e-mail, several confused groups thought they did not need to submit an appeal. While two of these groups made the one week deadline, one of the groups was given an extra day to complete their budget.

"The only extensions granted were because a liaison has presented misinformation," Earll said.

Those in favor of reviewing the ASPSU budget also argued that other students groups who were in violation of fee committee guidelines were granted exceptions.

Earlier, the fee committee had deliberated for nearly two hours over whether or not to review the Student Activities and Leadership (SALP) budget despite perceived fee committee guideline violations. Some committee members felt that SALP had violated guidelines because job descriptions on the budget were inaccurate and for failing to formally approve their budget through the SALP advisory board.

Others members argued that the job description inaccuracy did not constitute a guideline violation and that SALP had in fact submitted sufficient proof that the advisory board had approved the budget.

"In my opinion, [whether or not the groups were in violation of fee committee guidelines] has been black and white in each case," fee committee member Nicole Greco said in response to allegations by a fellow member that the fee committee was making exceptions in some cases but not in others.

They ultimately voted to review the SALP appeal, but added a footnote to the approved budget that stated that SALP must seek approval from their advisory board before the budget is reviewed by the student fee committee, and that job descriptions must be reviewed and updated no later than June 30, 2005.

Today is the last day of Student Fee Committee deliberations. The fee committee is required to submit a budget for approval by the senate by Feb. 17. 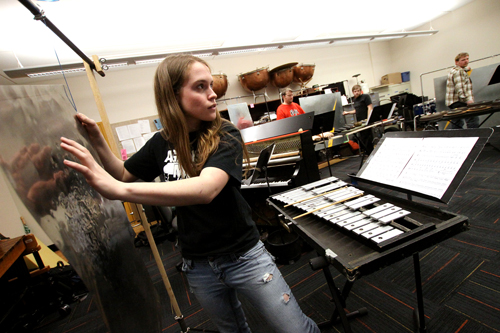 The Beat of a Different, well, instrument.

Yet another diet trend