The arrest was the result of a probation violation, stemming from unauthorized travel, according to Rahmlow.

Rahmlow stated on Sunday, Nov. 13, that the arrest was the result of unauthorized out-of-state travel.

“When you’re on probation you need to get written permission to travel, ahead of time,” Rahmlow said. “I didn’t follow the correct procedure—I messed up.”

Yesterday, Rahmlow again spoke to the Vanguard, amending his statement.

“Part of my probation violation was due to a dishonest statement that I made,” Rahmlow said.

According to Rahmlow, he had indicated to the court that he “realized too long after the trip was planned that I needed your permission to leave the State of Oregon.”

“The dishonesty lies in the fact that I knew I needed permission,” Rahmlow said.

Rahmlow was sentenced by a Multnomah County Judge to serve four days in jail, but was released one day early.

“They can’t release on weekends is the way I understand it,” Rahmlow said. “The judge also told me that I have to read the book River of Doubt and write a report on it.” The book is a biography of President Theodore Roosevelt.

Rahmlow’s probation was the result of a prior conviction for resisting arrest, as reported in the Vanguard on May 20, 2011. The story was investigated based on an anonymous tip received shortly after Rahmlow was elected ASPSU president. The incident in question occurred during the summer of 2010, when Rahmlow, then an ASPSU senator, was ordered by a bouncer to leave the Dixie Tavern, where he and friends had been drinking. Rahmlow attempted to re-enter the establishment, and when Portland Police officers tried to remove him, an altercation ensued. 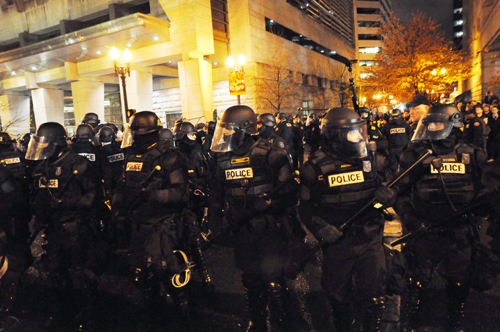