I was probably around 7 or 8 years old the first time I walked past a Victoria’s Secret. My curiosity and burgeoning sexuality made me a prime marketing target despite my age.

I was probably around 7 or 8 years old the first time I walked past a Victoria’s Secret. My curiosity and burgeoning sexuality made me a prime marketing target despite my age. 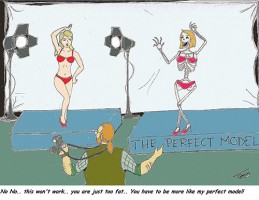 Victoria’s Secret has become a billion-dollar corporation by selling sex to, well, everyone. It’s completely taken over mass-market lingerie sales, and continues to create garments designed to make us feel sexy and really bad about ourselves at the same time.

News reports about scandals in the worlds of modeling and fashion are frequent. We’re not happy and entertained unless there’s some kind of dramatic issue happening. The Victoria’s Secret models, also known as “Angels,” are all beautiful: tall, skinny yet well-endowed, racially ambiguous and, above all else, desirable.

In August, Jezebel, an online feminist news blog, published untouched, raw photos from a Victoria’s Secret shoot for its spring catalogue. The Internet quickly became inundated with analyses of the before-and-after photoshopping.

When you see before and after shots side-by-side, you expect to see all the imperfections we see in ourselves. The extra pounds left over from the holidays, the zits and split ends that never seem to go away…the list goes on. What’s surprising about this set of photos is how little, at first glance, seems to have been changed: The only noticeable changes are garment colors, background photography and edits to the hues, saturation and brightness.

If you look closer, however, you can see the subtle changes. In the edited versions, model Doutzen Kroes’ thighs, arms and belly were slimmed and smoothed down, her chest defined through shading and saturation. What’s extremely strange is that Kroes’ muscle tone was almost completely erased.

In the fashion industry, photo editing is the norm. Models are hired to display a certain image and theme that designers have in mind. They need to be larger than life in an ethereal and otherworldly sense. That’s probably where the VS Angels thing came from. It’s normal to expect editing for catalogues, but there’s a bigger problem going on here.

The VS models are already far thinner than the average woman. They are already beautiful, slim and toned. When it comes down to it, they don’t need to be slimmed down or smoothed out. (Brightness, saturation and other such elements make a little more sense.) All the superfluous editing does is make the rest of us angry, and not because we don’t look like that naturally.

It angers us because it only serves to perpetuate unhealthy body expectations and to fuel eating disorders.

Of course, it’s a marketing ploy. VS wants consumers to think that buying their products will make them feel and look like the women in the advertisements. While marketers and advertisers want to sell products, it’s like VS wants to make us all feel uncomfortable about our bodies. Not cool.

This isn’t the first time VS has had trouble with Photoshop flukes. The company is notorious for its overedited catalogues and ad campaigns. Despite the fact that the media has a field day every time one of these Photoshop-gone-wild stories breaks, it keeps happening.

In defense of photoshopped images, VS Angel Erin Heatherton told Vogue Magazine, “We’re not selling reality, we’re selling a story. It’s all about creating this fantasy.”

That’s cool and all, but c’mon. The Angels already seem pretty fantastical without all the unnecessary editing. I mean, have you ever sat and watched the annual VS fashion show? Those models are all beautiful just the way they are.

Sure, magazine editorials might need some minor editing. But when limbs are removed and proportions become unnaturally unbalanced, maybe there’s too much editing going on.

Rather than perpetuate unhealthy body images and expectations for models, Victoria’s Secret should embrace the natural beauty their models already possess.

If we’re going to continue attempting to cultivate a healthy future for next generations, let’s put emphasis on being happy with the bodies we have and stop policing those of others. We only get one life to live, so why not spend it being happy and healthy, both physically and mentally.