Walk into the Ben & Jerry’s store in PSU’s Urban Plaza and you’ll see a familiar sight.

There are the predictable brightly colored posters and signs, freezers full of ice cream and, of course, you’ll be greeted by a friendly scooper behind the counter.

Walk into the Ben & Jerry’s store in PSU’s Urban Plaza and you’ll see a familiar sight.

There are the predictable brightly colored posters and signs, freezers full of ice cream and, of course, you’ll be greeted by a friendly scooper behind the counter. 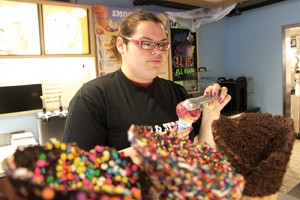 Stephanie Norgaard, the catering manager at Ben & Jerry’s PartnerShop and a PSU junior, scoops ice cream for a customer. Norgaard has been with the PartnerShop for almost two years.

What makes this store unique, however, is that it is actually a PartnerShop collaborating with the local organization New Avenues for Youth, which works to educate, employ and give aid to homeless and at-risk youth in Portland.

Since the shop opened in July 2011, it has been fully staffed and run by at-risk and homeless youth who participate in the Promoting Avenues to Employment program through NAY.

The PAVE program was founded by community and business leaders who were essentially trying to “find the formula to remove kids off the street,” Cat Ellingson, a case worker with the program, said.

Those admitted to the program have the opportunity to work in the Ben & Jerry’s store. The average worker is employed by the store for about eight months.

“The threshold for impact is six months,” Ellingson said. 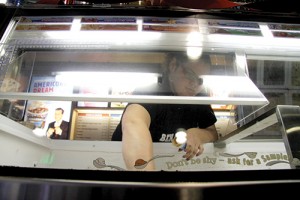 Ellingson has been working at and helping to organize the flow of workers in the PartnerShop. She said the PAVE program really works to help get people the resources they need to succeed, which are often unavailable to the people who need them the most.

The PartnerShop at PSU is not the first to have this unique relationship, however. The original is located on Yamhill Street, right next to Pioneer Square.

“It’s a real uphill battle to cultivate and maintain those relationships with the businesses [with whom we work],” Ellingson said. “But it’s important that youth have the opportunity to advance. You just can’t trade having a job.”

NAY provides other services as well. Every morning from 9 to 11 a.m. at their near-Burnside location, a wave of homeless youth are offered free cereal and a warm breakfast. The room is reopened to serve lunch from noon to 6 p.m. The youth check in and have breakfast, and also have in-hall counseling and access to showers, laundry and soap.

NAY also hosts an educational facility that focuses on helping people obtain their GEDs or take the necessary steps toward a college degree at either a community college or a four-year school.

“A majority of people are working toward their GED,” Ellingson said. “Our team here really supports that.”

Ellingson explained that the PartnerShop at PSU helps to encourage the workers at Ben & Jerry’s to pursue further education, especially at a four-year university such as PSU. The more exposure they have to the college environment and other students, the easier the transition can be.

Lauren Dees, now studying business with a minor in community health at PSU, began an internship in October with the PAVE program through Student Leaders for Service, to help get the word out about what’s happening at the stores.

Dees spends between five and eight hours a week work store, working on projects such as flyers to educate the PSU campus about the program and the PartnerShop. She admitted that the short time she’s been interning for the program has already had a positive impact on her educational and career goals.

“I love being a part of this, watching and helping what Cat does and working with these guys,” Dees said.

The catering manager at the PartnerShop is PSU junior Stephanie Norgaard. Norgaard is studying psychology and social work, after transferring here from Portland Community College. She’s been with the two PartnerShops for almost two years now, originally starting as a scooper and working up to catering manager.

Norgaard spends most of her time organizing orders from PSU and the surrounding community, managing paperwork and invoices and training others. Right now, she’s working toward the next step.

“I want to be an assistant manager, I really do,” Norgaard said.