With tournament season just around the corner, Portland State (19-9, 12-2 BSC) is looking like the Big Sky’s best team and is in great position to claim sole possession of the conference’s automatic bid into the NCAA Tournament. But there is one question that is still unanswered: Are the Vikings the best Division I team in Oregon?

Three other Division I teams call the Beaver State home, including Oregon, Oregon State and the University of Portland. And while the Vikings have the most impressive record of the foursome and are the only first-place squad, there is still some doubt as to whether Portland State is the best team in the state, due to strength of schedule and difficulty of conference opponents.

Here’s a look at how the Vikings stack up against their in-state rivals.

The Pilots are the only Oregon team Portland State has faced in a head-to-head matchup this season, with the Vikings winning that game 78-73 at Portland on Nov. 28.

The Vikings and Pilots faced several of the same opponents during the early portion of the season and incurred similar results. Portland defeated Idaho State, Northern Colorado and Montana. The Pilots also lost to Washington and Eastern Washington.

But, as evident by their less-than-stellar record, the Pilots are an inconsistent squad that lacks strong defensive intensity and potent scoring threat, outside of sophomore guard Nick Raivio.

The Beavers and Vikings have taken two different paths after finishing their early-season non-conference schedules with perfect splits at 6-6 and 7-7, respectively.

Oregon State fired head coach Jay John mid-season and has three games left to avoid going winless in the Pac-10, whereas the Vikings are in the midst of a 10-game Big Sky winning streak.

The Beavers were also upset at home by Montana State 58-57, which is the same team Portland State beat 96-85 at home and 96-68 in Bozeman, Mont., to clinch the regular-season title.

When it comes down to it, Oregon State’s psyche is too fragile to go toe to toe with the Vikings. One double-digit Portland State lead, and the Beavers would throw in the towel.

If there is a team in the state better than the Vikings, Oregon is the one.

The Ducks like to play an up-tempo style predicated on forcing turnovers and outscoring their opponent, much like the Vikings. In fact, the Ducks and Vikings even seem to be constructed in a similar fashion.

Oregon features a small, quick point guard in 5-foot-6 sophomore Tajuan Porter. Much like Vikings’ junior point guard Jeremiah Dominguez, Porter is deadly from the outside and has the ability to penetrate to the rim when needed.

Junior guard Andre Murray gives up some size to Oregon’s senior guard Bryce Taylor, but they fill similar roles for their teams. Both are the unassuming type that can either disappear during the course of a game or take over.

Senior guard Malik Hairston also has a two-inch size advantage over his Viking counterpart, Deonte Huff. Hairston is the better shooter at 52 percent, compared to Huff’s 48 percent, but Huff, a senior forward, gets more rebounds and assists than Hairston.

Up front is where the Ducks and Vikings could give each other the most trouble. Sophomore forward Kyle Coston would struggle to defend Oregon’s sophomore forward Joevan Catron in the post, but Catron would also have to pop out and guard Coston on the perimeter. Sophomore forward Julius Thomas also fills in here to give the Vikings more toughness and athleticism.

The matchup between Portland State senior center Scott Morrison and the Ducks’ senior forward Maarty Leunen might be the deciding factor if these teams ever faced off.

At 6-foot-9, Leunen gives up two inches to Morrison, though Leunen, averaging 15.1 points and 9.4 rebounds, has spent most of his career banging with the best big men in the Pac-10. Morrison could guard Leunen down low, but would be run ragged chasing him around the three-point line.

If these teams battled 10 times, maybe each would walk away with five victories. With that said, the Ducks have too much depth and athleticism for Portland State. It would be close, but the ballers from Eugene receive the nod this time. 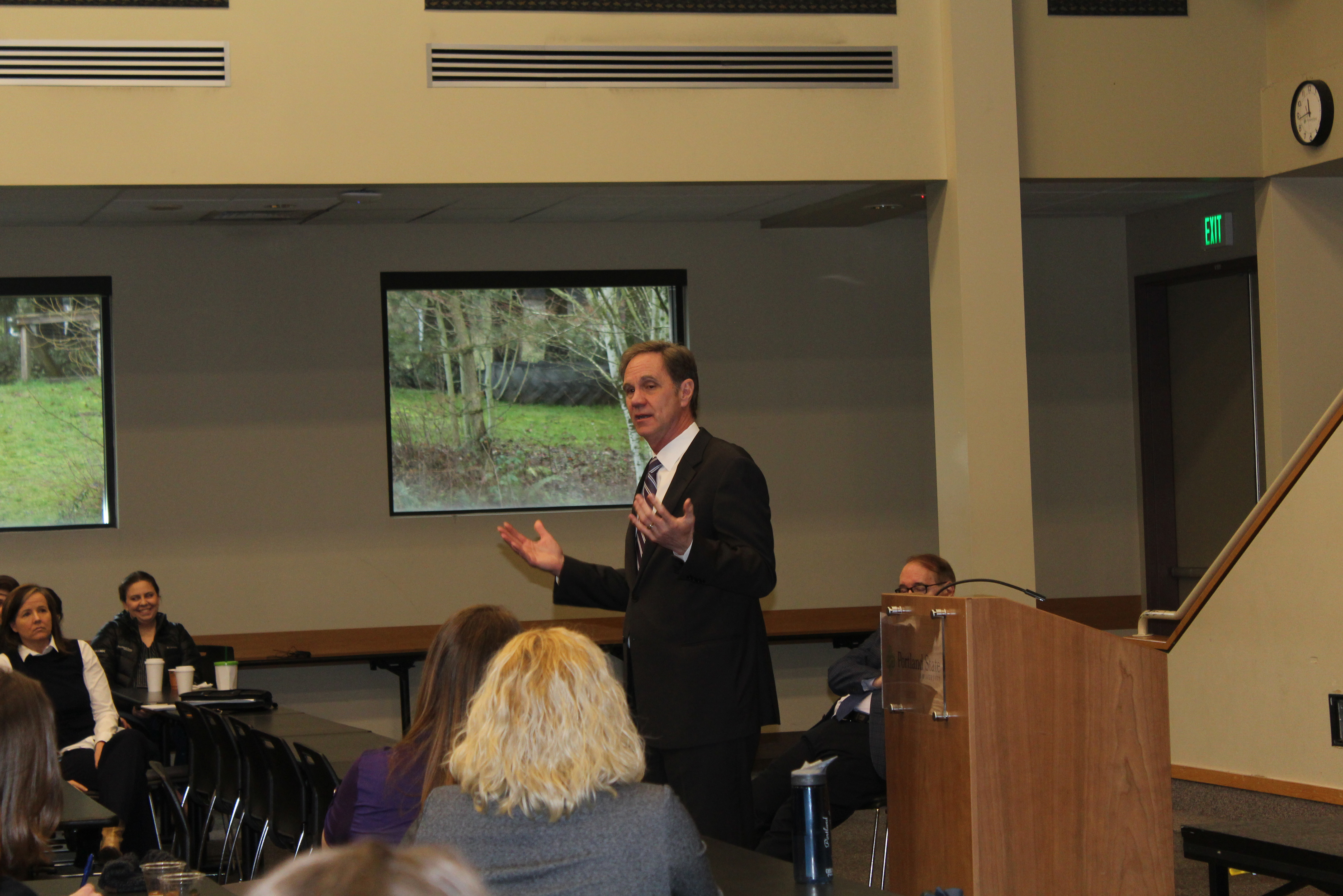