Given his reelection campaign, does Obama deserve to win?

This time next week—barring recounts—the madness will be over, and we’ll know who our president will be for the next four years. I voted for Barack Obama, which probably isn’t surprising. But based on the campaign he ran, I’m not sure he really deserves to win.

THAT’S WHAT’S THE MATTER
By Kevin Rackham
Given his reelection campaign, does Obama deserve to win?

This time next week—barring recounts—the madness will be over, and we’ll know who our president will be for the next four years. I voted for Barack Obama, which probably isn’t surprising. But based on the campaign he ran, I’m not sure he really deserves to win. 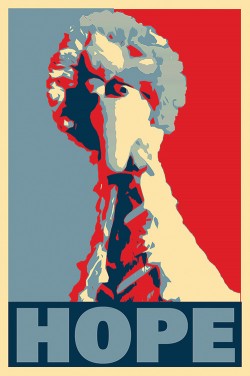 I’m not going to talk about the first debate, because that’s already been run into the ground.

There have been other times when it seemed like Obama’s heart wasn’t really in the campaign. Following the debate, he didn’t go after the way Mitt Romney for the way he went back on his tax plan, nor did he expose any of the less-than-factual claims Romney made.

Instead we were treated to the hilariously over-the-top “fear Sesame Street, not Wall Street” ad mocking Romney’s promise to cut funding to public broadcasting. It was a really stupid thing for Romney to focus on, especially considering how lacking Romney’s budget platform has been in specific cuts and plans of action.

Shortly after the ad’s release we were treated to will.i.am’s remix of the Sesame Street theme song during Obama’s appearance at Ohio State University. And the Obama campaign spent an entire week going after Romney’s Big Bird comment.

What was the point? Kids don’t vote, and I can’t think of anyone else who feels passionate enough about Big Bird to let the issue sway his or her vote. They may have gotten some concerned parents, but there are much bigger fish to fry.

This is a serious election, and I really want the right person to end up in office.

The economy’s still awful, we’re supposed to be out of Afghanistan during the next president’s term, universal health care is at stake and the Republican Party has been going after women’s reproductive rights in a really disturbing way.

It hasn’t been treated like a serious election by the Obama campaign, though, and Romney wouldn’t handle any of the issues I just mentioned in a way I’d agree with.

Rather than focusing on sound bites and gaffes, Obama should have focused on whether Romney’s plans will work, or whether Romney even has plans.

The tax and budget plan hasn’t been verified by actual numbers or real math, and Romney has continually changed his mind on abortion, the economy and health care since his campaign began. He should have been taken to task for these things, but he hasn’t been.

Obama seems to be losing ground in the polls (not that the polls have been anything close to uniform this year) and not because Romney’s been running a great campaign. Romney’s campaign has been offensively pandering, and the “47 percent” comment should have swamped him a lot more than it did.

I’m voting for Obama because I am actually satisfied with the last four years. We haven’t made the ideal amount of progress, but we’re doing better than we would have with John McCain, and the economy is making a recovery. But neither Obama nor his campaign has done a good job convincing other people of that.

Many Americans lost faith in the president, or didn’t have any to begin with, and they haven’t been given much reason to change their minds.

It took Bill Clinton to point out that Obama has actually enacted useful student debt legislation, and that should have been one of the first things they focused on since students were one of his most supportive demographics in 2008. It took Joe Biden to start fact-checking and getting on specific policy points during the debates.

It’s been a really long election, and I’m nervous to see how it ends. Samuel L. Jackson’s “Wake the Fuck Up” ad went viral the day it was released, but it wasn’t directed at the right people.

Maybe Obama was too busy actually being president to bother running for the office this year, but I sure hope that doesn’t come back to haunt him.

Up next: Northern Arizona Lumberjacks