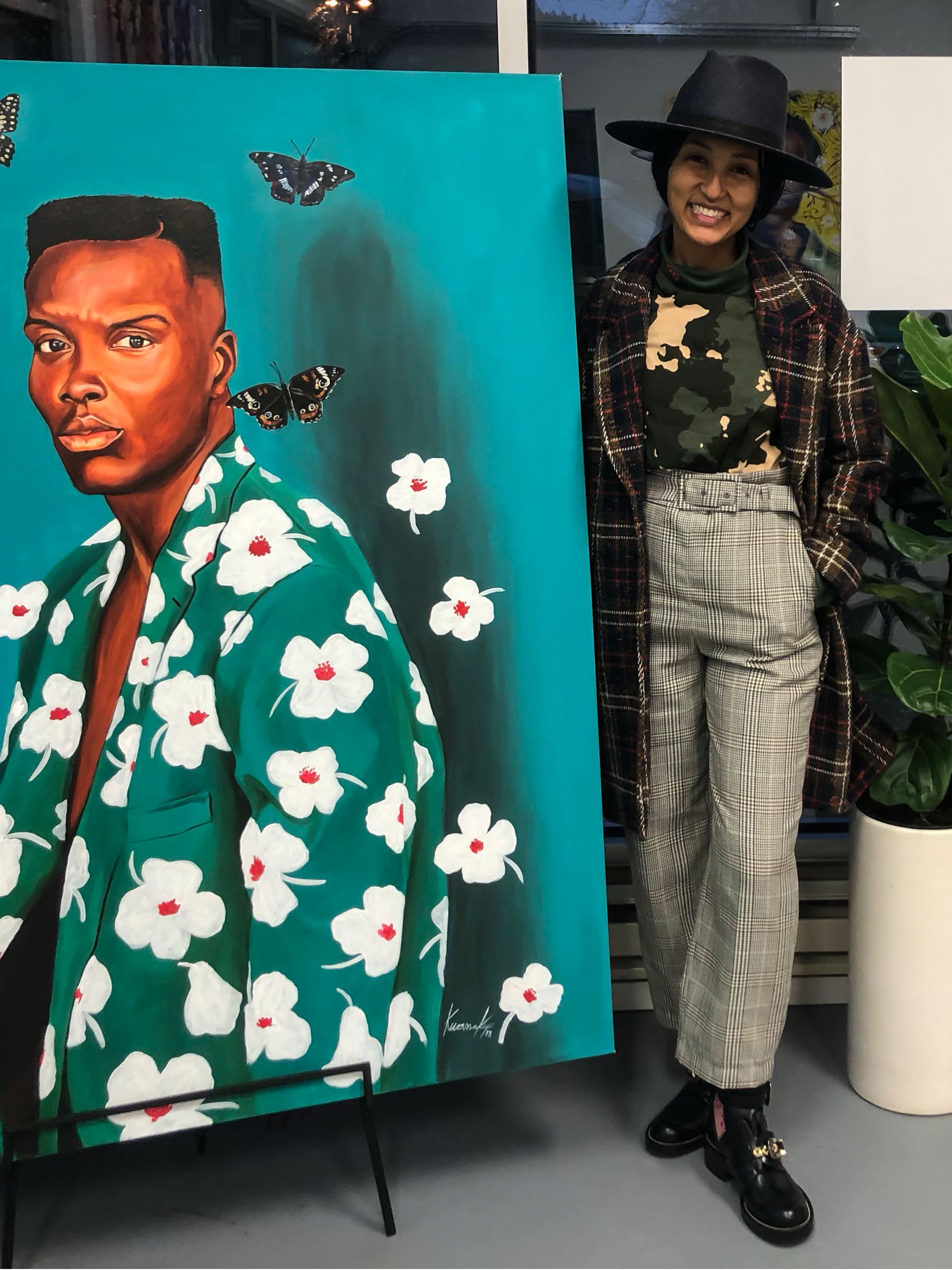 Blazer fans are surely aware of the Nigerian-American baller #8, small/power forward Al-Farouq Aminu. A Trailblazer for about four years now, Aminu comes from a line of Nigerian kings—literally making him a prince—and his name translates to “The Chief has arrived.”

Al-Farouq Aminu and his wife Helina Tekeste Aminu honor that African regality through their appreciation and promotion of African art. Tekeste Aminu is Ethiopian, and she and her husband have been steadily collecting art from their home countries and other African countries over the last seven years. They don’t look for big names, focusing specifically on street artists and whatever they find that they simply like.

When their family made their way to Portland, they wanted to find a way to showcase everything they’ve gathered throughout the years. With Al-Farouq hitting the courts, Helina took over the main artistic duties, deciding to transform her personal workspace to one for others to enjoy as well.

“I was first housing all of the pieces we brought to Portland here at my studio,” Tekeste Aminu said. “Then, I decided to do an exhibit with Otis super, super last minute.”

Currently, she’s hosting the “Black-ish” collection by Ghanian-born, new-to-Portland artist Otis Kwame Kye Quaicoe. Quaicoe heard of Tekeste Aminu’s art space the same way most people did—through social media posts she made on her personal Facebook and Instagram profiles that were mentioned by sportscasters during the broadcast of a recent Blazer home game. After meeting Quaicoe and going through all of his art, she decided to clear out her space and make room for his work.

“I thought it would be more meaningful to use our platform to present Otis and have him connect with people here,” Tekeste Aminu said. “He’s local, and he may be able to further his career which is better than us just showing off our personal pieces.”

Aside from the Aminu’s personal collection of crystals, jewelry and art pieces from Nigeria, Haiti, South Africa and more, the studio space also housed Tekeste Aminu’s fashion designs, which are her contributions to the art world for now, though she would like to do more. “I design and make a lot of clothes, but I’ve never actually painted,” Tekeste Aminu said. “I don’t know how to paint so I don’t know where to start. I feel like I do a lot of creative things but painting, no. I would like to, though.”

In the meantime, Tekeste Aminu stays up on her fashion designs, sometimes making special request orders for family and friends. It’s a labor of love, but she’s not sure if she wants to do anything further with it. “A lot of my stuff I have prototyped so I thought about doing a super-sale kind of pop-up and just letting people buy it for little to nothing,” Tekeste Aminu said. “I feel like it’s something I’m passionate about, but I don’t know if I want to turn into a business. I think you would take a little bit of the passion out of it.”

She usually works with a lot of bright and beautiful fabric from East and West Africa, but she’s not the only one in the family that takes to cloth more than typical canvas. Al-Farouq also dabbles in producing art, particularly on clothes. “My husband is super creative,” Tekeste Aminu said. “He does a lot of design, drawing and a lot of art on clothes—more so than on canvas. I guess clothes are his canvas.” She credits her husband for paving the way for art as an outlet for the family, but she doesn’t think he’s into putting any of his own creations on display, stating that he’s “real private” about it.

Tekeste Aminu’s ultimate goal is to host pieces and collections from almost every country in Africa. Besides Quaicoe, she’s got another artist lined up to exhibit—an abstract Eritrean artist currently based in Seattle also reached out to her after her social media post and she plans to have his work on display next month.

“I’m totally open to letting artists use my space,” Tekeste Aminu said. “Sometimes it’s hard to find somebody that believes in your work and wants to put on your show, but I feel like it’s very important. If I believe in the art I totally will show it.”

Helina Tekeste Aminu encourages African artists to reach out to her via her Instagram, @helinaaminu. Her studio is located at 1720 NW Lovejoy, Suite 109. You can visit the studio by appointment, but Quaicoe is hosting a meet and greet at the space on Feb. 23–24 from noon–5 p.m.

How to talk to a conservative