“Bug,” currently running at the Artists Repertory Theatre and directed by the company’s artistic director Allen Nause, begins with a promising immersion into a dark world of drugs and paranoia. Unfortunately, the production takes a turn after the intermission and becomes a lesson in unintentional camp.

Artists Repertory Theatre promotes itself with the slogan “intimate theater on the edge,” and “Bug” certainly dances along that edge. Upon entering the theater, one is greeted by signs that warn patrons that the production contains drug use, graphic nudity, sex, smoking and drinking. The signs may serve to make some Portlanders feel quite at home and heighten expectations for a great night of theater for others. After all, the list sounds like such a good time, who wouldn’t be excited?

Set on the outskirts of Oklahoma City, the action unfolds in a grimy hotel room. The authenticity with which the company approached the set design was startling. Looking at the set in the slow minutes before the beginning of the play, one feels as if they are looking into the Motel 6 of their nightmares. The desire to take a shower is almost overpowering.

The lights come up on Agnes, an out-of-luck crack smoker who is hiding out from her ex-husband. Agnes is thin and strung out and for the first painful moments of the play we watch as she wanders around her hotel room, listening to sounds of sex, dogs barking and the broken air conditioner, all beautifully rendered by the brilliant sound technicians.

In due time we are introduced to Agnes’ lesbian biker friend and Peter, a quirky stranger who smokes crack because snorting cocaine is “unhealthy.” The dialogue between these characters is brisk, rings with authenticity and is served well by the understated accents of the actors. As Peter and Agnes develop a relationship we truly begin to understand the loneliness that has driven these characters to the motel wasteland that they inhabit. It seems inevitable, then, that they gravitate towards one another.

The plot is complicated by Agnes’ ex-husband, the violent and menacing Goss. Although the character is expertly played by Scott Coopwood, his only purpose in the production seems to be to give Peter a foil and Agnes a reason to be isolated. Beyond this, he simply takes up space, appearing and disappearing from the scene without much explanation.

The true story here is between Agnes and Peter, who consummate their relationship late in the first act. At this point the plot begins to turn as Peter begins to be plagued by invisible blood-sucking aphids, which may or may not be a delusion. In the play’s most powerful scene, a stark-naked Agnes and Peter begin to feed on one another’s delusions, the dialogue becoming confused and surreal as Peter’s quirkiness becomes more frightening.

It must be said that the actors are working with difficult, unstable characters; therefore it is a bit more forgivable that in their attempt to portray untrustworthy traits, they become a bit stiff.

The end of the first act leaves the audience wondering if the bugs are real or simply a hallucination brought on by drugs and insanity. Either way, what comes is unexpected.

After the intermission the play takes an intense left turn towards insanity as Agnes and Peter have continued to be obsessed by the microscopic flesh-eating aphids. They have filled up a hotel room with pesticides and lab equipment – and one wonders where the money came from to procure such things, as crack-heads are not known for their savings – and have begun to dig at one another’s skin to get out the burrowing creatures.

As the play reaches a fever pitch of insanity and murder, the cast seems to become almost hysterical in their portrayal. It seems that at times the acting is so overstated that instead of watching an intense thriller we are watching a melodrama with blood.

In a final scene, Peter leads Agnes through a stunning, paranoid justification of her painful life. This scene is phenomenally written, but the delivery is so over-the-top that what could have been an intense nail biting and agonizing dialogue becomes almost comical. It is no wonder then, that as the smoke clears and the house lights come on, the audience is giggling at the silliness they have just witnessed. Somehow, I doubt this was the intent.

“Bug” would be an excellent journey into psychosis and psychological trauma if one were to leave after the first act. It would be the kind of “theater on the edge” that Artists Repertory Theatre could be proud of, too, if it did not so blindly stumble over that edge and plummet into absurdity. 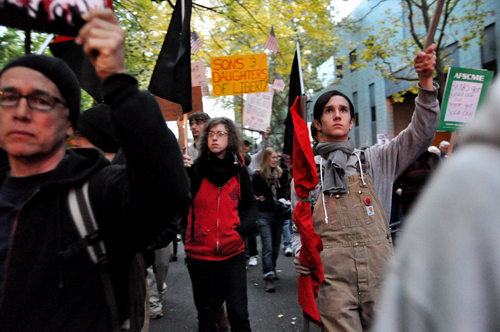 Does this make you hot?