As Portland State begins to enforce the Clean Air Corridor—a smoke-free area surrounding Neuberger Hall, Smith Memorial Student Union, Cramer Hall and Lincoln Hall—a simple question arises: Where can smokers go to enjoy their tobacco, and how will the ban be enforced?

As Portland State begins to enforce the Clean Air Corridor—a smoke-free area surrounding Neuberger Hall, Smith Memorial Student Union, Cramer Hall and Lincoln Hall—a simple question arises: Where can smokers go to enjoy their tobacco, and how will the ban be enforced? 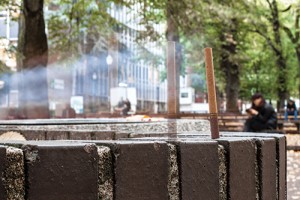 Even as a smoker, I completely agree with the proposed ban, as this area hosts the highest foot traffic and congestion on campus. Right now we’re nearly forced to walk through cigarette smoke in order to get inside any of these buildings.

Although the smell and smoke from tobacco don’t bother me, I’ve observed multiple instances of noticeably uncomfortable students who have no other choice but to walk through puff after puff of smoke on their way to class.

I’m truly sympathetic and, in fact, things like this made me more conscious of when and where I exhale, and I try to be as unobtrusive as possible. Despite the validity of a smoking ban and PSU’s intent to improve air quality (including addressing other pollutants like cars idling on Broadway), the idea of a smoking ban in the South Park Blocks, while a noble endeavor, is a misguided one.

Of all the locations on campus, none offers the ability to create personal space like the South Park Blocks do. Here, students can spread out, lie down and enjoy some peace and some space. They can be undisturbed by the presence of others.

The rationale behind the smoking ban appears to be that pollution from second-hand smoke interferes with park-goers’ ability to enjoy the space. But don’t the conditions that make the park so ripe for enjoyment also apply to smokers?

Here, smokers can use the open spaces to situate themselves away from others in an effort to avoid disturbing them with the smell and smoke of cigarettes. Smokers can use the abundance of open park land to both enjoy the personal space it affords them, just as the nonsmokers do, and to avoid bothering others.

It seems like the most reasonable place for smokers to go, not only for their own sake, but for the sake of nonsmokers as well.

In addition to the question of where smokers can go once the smoking ban takes effect (and if the potential ban in the South Park Blocks becomes a reality), the question of how it will be enforced intrigues me.

I envision a special division of the Campus Public Safety Office, something along the lines of the A-Team, roaming campus, always on alert for the cigarette-smoking delinquent, perpetually ready to stomp out butts while providing antismoking pamphlets in addition to the citation.

In all seriousness, though, what types of punishments will be handed out? What would be the fine, if any? Will repeat offenders be punished more severely? Would continual offenders be forced to attend mandatory Smokers Anonymous meetings?

These are real questions and if there are answers, they need to be made public and available. As a smoker, I want to know what type of punishment I potentially face.

If additional officers are needed to enforce the smoking ban, how will they be funded? Will it come from citations handed out to those who ignore the ban? This is another aspect of the ban that needs to be transparent. We need to know how enforcement will be funded. I doubt that the enforcement would require a tuition increase, but we really don’t know for sure, do we?

Finally, if the smoking ban is predicated on a notion of equal consideration, that students should have equal right to the enjoyment of the campus without being disturbed by others, how does this potential smoking ban in the Park Blocks take into consideration a smoker’s right to enjoy a completely legal activity?

Banning a legal activity in a public park is a difficult notion to make sense of. It appears that the consideration of smokers, or their right to enjoy the Park Blocks, is not equal to that of others.