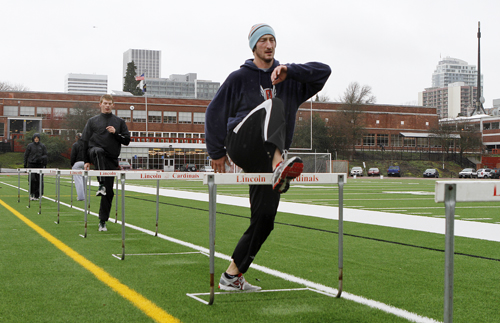 After a rocky season, Portland State’s men’s basketball team is just a victory away from a spot in the Big Sky tournament. This year’s team has become known for hosting big personalities and big stars. High scorers like Charles Odum and Chehales Tapscott have brought attention to the team from the Big Sky Conference, garnering multiple Player of the Week honors as well as television interviews.

After a rocky season, Portland State’s men’s basketball team is just a victory away from a spot in the Big Sky tournament. This year’s team has become known for hosting big personalities and big stars. High scorers like Charles Odum and Chehales Tapscott have brought attention to the team from the Big Sky Conference, garnering multiple Player of the Week honors as well as television interviews.

But behind the prominent seniors are rising stars like junior transfer Renado Parker. The quiet center, who came to Portland State last year but just started playing this season, has proven to be an anchor for the team at midcourt while putting together an impressive series of statlines in January and February.

“At first, I really wasn’t sure about playing the whole center thing, because I never really played a center,” Parker said. “This is really my first time. I got used to it. I got to do what I got to do to help my team win. That’s what it’s all about.”

After racking up All-American and MVP honors in junior college, Parker was recruited to the University of Idaho. He wasn’t there long, though. A combination of the weather, distance from his family in Seattle and not liking Idaho’s system made him jump ship for Portland State.

“The University of Idaho—I felt like it was more strict there,” Parker said. “For the plays, the timing had to be exactly right or the coach would make you do it over-and-over-and-over-and-over again. Over here, it’s just get it and go. We have a half-court offense, but I feel like there’s more freedom here than I had in Idaho.”

Parker and his family moved to Washington from Louisiana when he was a teenager. He started playing basketball before he was old enough to go to school, and he brought that interest with him to the Pacific Northwest.

“When I was little, my brother went to school, and I was just home by myself with my mom, so I used to just watch basketball,” Parker said. “I used to just watch Penny Hardaway when I was a kid. He’s my favorite player. And I’d just have a whole bunch of time by myself to do nothing. I used to go out to basketball courts and play and play. My dad was always at work. He’d come home at night. So one day my cousin told him to sign me up for basketball.”

Parker grew up dreaming of going to the NBA, but as he grew older, he tempered his dream. After college, he wants to play basketball overseas and open a restaurant. For now, he’s just happy to play basketball at the college level.

“It’s very important, because I have two little brothers and they want to go to college too,” Parker said. “And if they see that I’m doing good, then hopefully they’ll follow in my footsteps and play sports and go to college.”

He said he hasn’t had any trouble fitting into the Viking team. He described the locker room as positive and tight-knit.

“A lot of jokes,” Parker said. “Everybody has jokes. It’s just a lot of jokes, like nonstop. Some people that you might not think would even talk, like Brandon Cataldo—he might be one of the funniest people on the team. There’s no arguments or anything like that.”

Parker has seemingly caught on fire this month. He’s ratcheted up his presence game-to-game, and he’s averaged 11.8 points and a .75 shooting percentage in the Vikings’ last four games.

“I’m fitting in good,” Parker said. “I came here last year. I really didn’t get to do much because I wasn’t playing, but I was practicing a little bit. Now I feel like I’m close with everybody on the team. Our chemistry is real good. I think I fit just perfect here.”

Riding in cars with Iranian women