Administration responds with details of plan

And how would these changes be paid for?

Administration responds with details of plan

And how would these changes be paid for?

To ask and hear answers to these and other questions, more than 40 students gathered with members of PSU’s administration in Smith Memorial Student Union’s Parkway North on Tuesday in an open forum coordinated by PSU’s student government.

Answering questions were CPSO Chief Phil Zerzan, Dean of Student Life Michele Toppe and Executive Director of the Center for Student Health and Counseling Dana Tasson. Vice President of Finance and Administration Monica Rimai was expected to attend but did not. 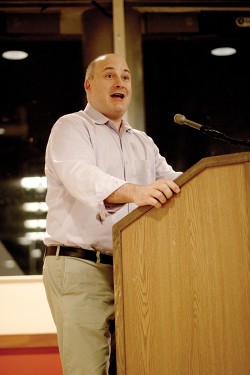 They wanted to hear the changes proposed for CPSO, if alternatives such as directing funding to crime prevention and increasing safety measures around campus had been considered, and where the money to fund the proposed changes would come from.

Zerzan said he’d like to create a police force integrated into PSU that is responsible to the university.

“Prevention is the most important thing we can do to make the campus safer for students, and it would be more cost effective than the current proposal,” Loehlein said.

Fixing poorly lit areas around campus and creating a safe-walk program, where groups of students with two-way phones could walk together to different parts of campus late at night, are examples of better options, he said.

“I want us to be proactive in making this a safe campus,” Loehlein said.

But Zerzan said his public safety officers need to have the right tools and training if they’re going to be asked to function as police officers.

“They are not equipped with the tools to effectively take someone into custody [who] represents a threat to the safety of our community and the greater community,” he said. Zerzan then cited the June 11 arrest of David Chilton, who pointed a gun at CPSO Patrol Officer Shawn McKenzie when confronted.

Zerzan said PSU’s criminal justice division studied CPSO arrests and found that 41 percent of the arrests were of non-PSU-affiliated subjects who had a recorded history of prior violent offenses, and 87.2 percent had at least one arrest on record before their arrest at PSU.

“My personal issue is…I don’t necessarily believe the arming of our officers is the answer to safety on campus,” Holmes said.

Tasson said that having a police force that answers to the university allows for input on training and how officers respond to students, and facilitates cooperation.

“We already have a great relationship with CPSO in that regard, and we don’t have that same relationship with Portland Police Bureau,” Tasson said. “We have a really complex campus environment, and having a police force geared toward our needs…would help promote the health and safety of our campus community.”

ASPSU President Tiffany Dollar was unable to attend but said in a phone interview that she wants to hear students’ views on the issue. In order to gauge student sentiment, ASPSU plans to launch a survey campaign in January.

“We definitely have a safety issue on campus, and hopefully the survey will help us find solutions that are in the best interest of the students,” Dollar said.

Toppe said she is confident that, with input, the change would deliver specially trained officers who understand student life and day-to-day campus operations.

“We have to make sure as many perspectives as possible are included as we move forward in planning the safety of our campus,” Toppe said. “Phil Zerzan is the person I trust to lead that movement. He has transformed the CPSO relationship with the student body. I see incidents every day of the positive changes he has instituted.”