Portland State Campus Public Safety Office Patrol Sgt. Joe Schilling was a young man looking for a rewarding career that would provide for his family when he went into the field of law enforcement with the Portland Police Bureau.

Portland State Campus Public Safety Office Patrol Sgt. Joe Schilling was a young man looking for a rewarding career that would provide for his family when he went into the field of law enforcement with the Portland Police Bureau. 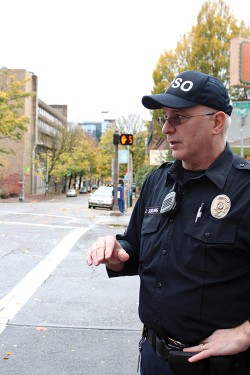 He found it—Schilling’s career with PPB lasted 26 years, and he was the department’s field training coordinator for 10 of those.

After retirement, Schilling came to PSU eight months ago because the chance to do something new piqued his interest.

“We have the opportunity here to do community-oriented policing the way it should be done,” Schilling said. “So many people have a good goal in mind here. That’s why we’re here, to make that opportunity safe and make it happen.” 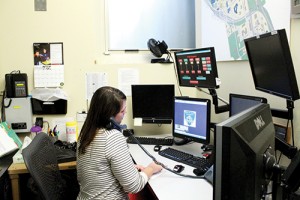 After working for PPB for so long, Schilling knows there is no such thing as a typical day in law enforcement, but says certain times of day do tend to deliver certain types of calls.

For instance, the day shift will respond to lots of cold calls—calls reporting a crime after it has occurred. This is because nighttime crimes can go unnoticed until the morning, when people are waking up and getting ready for class or work.

As a patrol sergeant, Schilling’s duties include supervising, watching and assisting the patrol officers in their daily duties. He says the most common calls that CPSO deals with are car prowls and thefts of student property such as laptops and bikes, as well as dealing with the larger community that surrounds PSU, including the transients who are a constant presence on and around campus.

CPSO also monitors open areas in the dorms, such as the classrooms on the second floor of the Broadway Housing Building, for transients or criminals who may victimize students.

“If we want to be safe in our urban environment we have to look at our own safety and responsibility,” Schilling said.

CPSO officers patrol unarmed, save for a baton and pepper spray. Every time an officer goes out on patrol and contacts someone in the larger community, this lack of adequate tools and resources concerns Schilling.

Schilling sees no downside to changing CPSO from a campus security force to a sworn law enforcement agency. He knows that one of the main concerns regarding this change is the idea of CPSO officers carrying guns. Many people don’t realize, however, that guns are already present, like when PPB officers respond as backup to calls on campus or when they handle calls CPSO is unable to handle, Shilling explained.

Currently, CPSO officers get one week of basic training before they begin at PSU, and Schilling is concerned that there are few ongoing training requirements.

In becoming sworn police officers, each CPSO officer would be required to attend Oregon’s police academy in Salem for 16 weeks, which includes firearms training and defensive tactics training. Officers would then be required to update their certification every year.

More training to handle the situations that arise and to more up-to-date skills would better prepare officers to do their job, Schilling said.