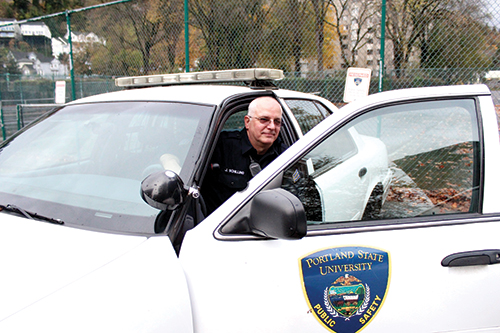 Sgt. Joe Schilling of the Campus Public Safety Office patrols campus. In the event of an active shooter, the Portland Police Bureau would need to respond.Photo by Corinna Scott.

People all across the country are asking questions about how to prevent the next horrific act of school gun violence, while at PSU our own debate has been simmering for months about whether campus security officers need their own guns.

How would CPSO’s response be different if PSU’s officers were armed?

The key difference lies in the extra minutes it would take for armed officers to arrive at the scene of a crime.

While there are emergency plans in place for a variety of incidents, campus security functions more as an incident in an emergency situation, CPSO Chief Phillip Zerzan said.

“We don’t currently have the ability to intervene and respond in an active shooter
incident. Portland Police Bureau would respond, but there is a timeliness issue with a community of this size and complexity,” Zerzan said.

The PPB Central Precinct responds to on-campus calls that CPSO is unable to handle, and their response to a report of an active shooter would differ if CPSO was a sworn agency, said Central Precinct Commander Bob Day.

“Obviously, if CPSO was a sworn agency, we would have armed personnel on scene sooner,” Day said. “Having an armed CPSO officer at PSU who knows the campus and is able to get keys to locked buildings could get us in [to the area of the incident] sooner, and we could locate the shooter sooner. I think it would increase overall response.”

Day added that multiple agencies would respond in an active shooter incident.

Information provided by CPSO’s records department shows that in 2012 there were 12 reports of firearms-related incidents on campus, with eight of those confirmed to involve firearms, though no active shooter incidents occurred.

Zerzan does not believe the recent tragedies add more urgency to the discussion of CPSO’s potential transition, but he does see how compelling the issue is, especially with the unique nature of campus policing.

PSU President Wim Wiewel said Portland State is as prepared as it can “reasonably” be for an active shooter incident.

“You can only be prepared for so many eventualities. Given the realities of life, we’re prepared as we think is prudent, ” he said.

Wiewel didn’t want to speculate about how the response to an active shooter incident would be different if CPSO were a sworn law enforcement agency, explaining that the topic is outside his area of expertise.

“This decision should not be driven by [the events] at Clackamas Town Center and in Connecticut. [It’s] not good logic; it’s reactionary and arbitrary to make this decision based on recent events,” he said.

According to Wiewel, the discussion and review of the structure of CPSO has been going on since 2008 and is still as important now as it was before the shootings in December.

“We’re aware such risks exist and we’re aware you cannot prevent all risks, [but] you try to make the best decision,” Wiewel said. “PSU does not seem like a horrendously unsafe place.”

If CPSO were a sworn law enforcement agency, in an active shooter incident CPSO would have armed police at the site in under a minute, Zerzan said. There would also be a comprehensive response plan in place involving locking down buildings and limiting access to the area where the incident is occurring. “We know that with most active shooters in academic settings, it is prompt police response that shortens exposure to the shooter.”

Wiewel made it clear that the decision has not yet been made.

“The door is still open and I’m very interested in the discussion of alternatives to enhance public safety alongside this proposal [of transition for CPSO],” he said. “There may be a way to reach an agreement or negotiation without going the full extent to sworn, armed officers. [This] discussion has not fully run its course yet and I want to have this discussion so all arguments can be heard and weighed and valued.”

In the meantime, there is still plenty to do on campus, Zerzan said.

“Our focus [also] needs to be on intervention and prevention, and we have that pretty good here with our community [at PSU],” he said. “But the reason to have armed police is to protect against someone who is acting outside the boundaries of the law.”

After the shootings, CPSO’s website was updated to include resources for students and staff in case of an active shooter incident. The website defines an active shooter as “an individual actively engaged in killing or attempting to kill people in a confined and other populated area.”

The website also says that “in most cases, active shooters use firearms and there is no pattern or method to their selection of victims. Active shooter situations are unpredictable and evolve quickly.”

The website’s resources include an instructional video entitled “Run. Hide. Fight.,” an “Active Shooter Pocket Guide,” and a link to an informational online class through the Federal Emergency Management Agency entitled “Active Shooter: What You Can Do.” All are available at pdx.edu/cpso/active-
shooter-what-you-can-do. Hard copies of the “Active Shooter Pocket Guide” are also available in the hallway outside of CPSO’s office in Shattuck Hall. The online course through FEMA is free and takes approximately 45 minutes to complete.