As America watched Dean’s raucous speech at the end of the Iowa caucuses, the Internet almost simultaneously lit up with our contemporary equivalent of Lily Tomlin’s manic telephone operator. Everyone was “calling” and everyone was clamoring for a piece of information about what exactly “it” was. And what it was, was pure political excitement. In a crowded room of supporters that had just suffered, by all accounts, a major political defeat, Dean screamed at them and they screamed back. It was political synergy, if you will. It was also a far, far cry from Al Gore’s deadening stares and George W. Bush’s smirks of cheerleader contempt.

Now Dean has also lost in the New Hampshire primary, with second place being a long, hard slog from first. The media teases that Dean’s Iowa speech was the nail in the campaign coffin (but not the coffer, as money still continues to flow to DeanforAmerica.com). How could a speech, although startling in its “realness,” really be the end of the candidate who has held the political consciousness of America for over six months? In my opinion, it wasn’t. It happened hours before the speech during a cold Iowa night on the eve of the caucus. For the major media outlets, though, it has become the primary synonym of the presidential debate between JFK and Nixon. In this debate Nixon began to sweat, and God forbid a little sweat on the candidate in the age of telegenesis. Nixon lost the election. For Dean, he not only sweated but also swooned, with neck bulging and voice raspy and alarmed. He was like an inspired high school teacher recounting the lower 48 states for a class who had grown painfully tired of geography tests.

I showed the speech to a rather moderate political friend. Her response: “That isn’t so bad. It is kind of endearing.” Either she has the hots for short doctors with big necks or she was right. I think the latter. It really wasn’t that bad. In many ways it was a drop of political passion in a race where the pundits keep intoning that Americans like their candidates “presidential,” which seems to indicate that we like our candidates to be over six feet tall, with larger jaws and mild-mannered (with a well-hidden, oft-denied streak of rebellion).

Howard Dean transformed what may have been a terribly predictable race and loss for the Democrats, into a possible victory. He proved that Democrats, unlike many other election years, could rally into something remotely cohesive (still nothing compared to fiercely loyal and ideologically far-right). He also tapped discontent that allowed for a short-circuit of the Karl Rove “traitor-test” (if you support Bush you are not a traitor; if you don’t, you are).

Howard Dean’s depth of support was anti-war. It was his defining issue. The problem is that many Democrats, though loathing the quagmire of Iraq, realize that the United States was already there and needed a solution, not a platitude. George W. Bush, the Democrats comprehended in Iowa, must be beaten and on the eve of the caucus vote they had to notice that half the country (not to mention Joe Lieberman) unequivocally supports the war.

For the Democrats, Iowa was a day of reckoning between courage, heart, and mind. And Howard Dean was Dorothy in Oz, pulling the curtain back on that annoying, blustery wizard whose instillation of fear relied on smoke, shock, awe and a house of political mirrors. For that, the Democrats owe Howard Dean, in the least, their heart.

What about the dog? 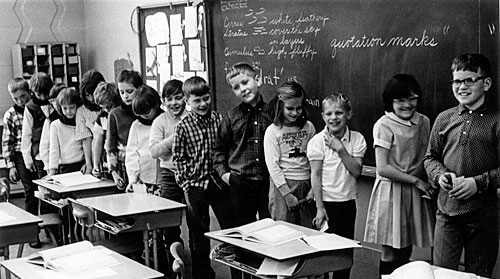 How do you feel about the Vagina Monologues being performed on campus next week?