Thanks to one of the lowest vacancy rates in the country and rising enrollment in its colleges and universities, Portland can be a challenging place for students to find housing.

Thanks to one of the lowest vacancy rates in the country and rising enrollment in its colleges and universities, Portland can be a challenging place for students to find housing.

Hoping to ease the situation, a local developer has drawn up plans for a new, privately funded, 450-bed apartment building to be built on Jefferson Street between Southwest 11th and 12th Avenues, and it has been designed specifically for students. 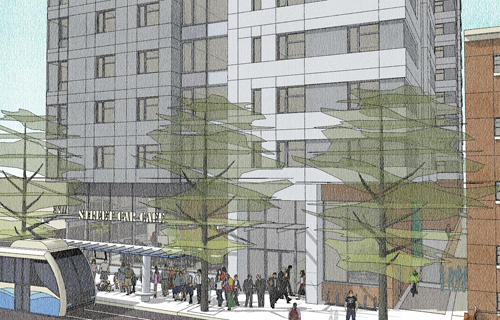 Despite the project’s location, PSU has no official ties to the project.

PSU Director of Communications Scott Gallagher said the university recognizes the need to increase on-campus housing and the number of students living on campus. PSU is not a traditional campus like the University of Oregon and has significantly more students who commute to campus, Gallagher said.

One of PSU’s greatest challenges will be meeting the need to house classroom and living space as the university grows from 30,000 to 50,000 students, Owendoff said

“PSU’s land is constrained on a 50-acre campus,” he said.

Projections place PSU enrollment at approximately 50,000 students by 2030. However, Gallagher cautions that the number is based on Governor Kitzhaber’s 40-40-20 plan. The  40-40-20 plan calls for 40 percent of all Oregon students to have completed a bachelor’s degree, 40 percent to have some type of post-secondary certificate and the remaining 20 percent to have a high school degree.

The PSU administration would like to increase the number of students living downtown and on campus, Gallagher said.

“Ideally, we have 25 percent [of students] living on campus,” he said, which would make for a “more vibrant, more engaging campus.”

“With the completion of University Pointe, that brings the number up to 3,000 beds total for PSU. But we realize that isn’t enough,” Gallagher said. He cited PSU’s track record of partnering with private companies to achieve expansion.

“What PSU does best is partnerships—the Student Rec Center and University Pointe are all examples of what can be created from these partnerships.”

Future projects that PSU officials are considering include housing for its employees. PSU has an agreement with the city to ensure that any housing structures it builds in partnerships with private entities would be low-income housing.

The street level of the building would include retail shops and a café. The structure would not have parking on the premises.

The city of Portland is selling the property for approximately $2 million to Capacity Commercial to satisfy the terms of an earlier agreement. “The money obtained from this sale will be used by the city to provide low-income housing within the Portland city limits,” said Matthew Larrabee, president of Real Estate Services Group Inc. and faculty member at PSU. The city can do this by working with existing partners, both nonprofit and commercial developers, either to renovate existing properties or to develop new ones—most likely within the downtown area. This is accomplished by providing either tax abatement or low-interest loans toward the development of low-income housing within city limits.

The building that will be demolished was originally called the Cordova Hotel and Annex. It has been used in a variety of ways since its construction in 1923 and, according to information supplied by Capacity Commercial Group, is not listed on historic registers.

Breakfast in Portland: the most important meal of the day