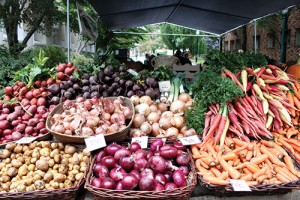 From potlucks to gardens, the economy to farm labor, the conversation at PSU’s Native American Student and Community Center centered on helping more people have better access to healthy food.

Amber Wagoner, cofounder and cochair of FAC and a sophomore in the community development program, said the event was for people who knew little of food justice, who are deeply involved in the food system or who are simply curious about the idea of “food justice.” 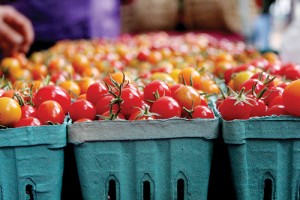 Cherry tomatoes from the farmers market held on Saturdays in the Park Blocks.

The movement envisions a food system that is community-led and involves no exploitation of people, land or the environment. The definition states, “[I]t identifies and acts to remove the significant structural inequalities that exist within our food and economic systems.”

All brought their own perspectives to the conversation.

Nash discussed a garden her organization has grown in the New Columbia neighborhood of Portland, and shared how it has helped her to completely change her diet. She thanks the garden for her ability to be as healthy as she is today.

“If it wasn’t for that garden, I never would have eaten fruits and vegetables,” Nash said.

Arredondo told the story of how he grew up in a family of farm workers. Coming to the U.S. as an immigrant in the early ’90s, Arredondo remembered noticing the abundance of food in the country. Soon after, he realized that most of it wasn’t the best food.

Growing up, his father couldn’t afford the food he was out picking. He would come home from a long day of work and not be able to interact with his family or help the kids with homework because he was tired and had never made it past high school.

Arredondo used his past to get involved with the community. He has seen the conditions of farm workers firsthand and knows that many families either live in very run-down houses or are homeless. He believes that to make a difference in this system these conversations and events need to involve the business sector.

Avila agreed that, in these conversations, the people involved are key. Her organization works to reach all across the board to get voices into discussion. They look at food harvesters, preparers and servers. She said that the system doesn’t simply have labor issues, it’s more of a justice and fairness issue.

Donohoe introduced a new perspective by offering medical and environmental ideas such as biodiversity loss, diminishing water resources, corporate takeover of the food system and pesticide use.

Thornberry explained that one of the goals of the food bank is to not only help immediate food needs but to end hunger and its root causes. She gave examples of small, rural stores that are unable to stock their stores and rural farm folks who have difficulty getting food.

Many areas in Oregon have only one “grocery store” in a 100-mile radius. But that grocery store is often more similar to what people consider a convenience store, she said.

Thornberry said that one woman has to drive from a small country town to the WinCo Foods in Portland to stock her store. Her only other option is to pay an unreasonably high price to get a large company to distribute food to her.

“We used to have good food all over this state, but we gave it up to the mass distributors,” Thornberry said.

Next came a question-and-answer session, where the audience was given the opportunity to bring up issues or questions they had. Among those asked was the question of what people can do to help in the Food Justice Movement.

Each panelist said the key is for people to get involved in any organization that fits for them.

Donohoe emphasized that education and getting kids involved in these issues at a young age is critical. As more people become aware of the inequality in the food system, more opportunity for change is available.

Thornberry suggested hosting local food potlucks. “One common denominator we have in all this is that we eat,” Thornberry said.

Suzanne Briggs, a community member who attended the symposium, said she found it very valuable to have such a diverse panel.

“What we really need to do to strengthen the food system is the cross-pollination between economics and food and labor,” Briggs said.

“I’m really happy that they brought everybody together. It’s a really vital discussion, and all of the panelists had a lot of great stuff to say,” said Moanna [confirm with author whether it’s Moanna, not Joanna] Wright, another audience member. “I would like to hear a little more about the tough questions of food justice. It would be good to hear more about the stuff that Arredondo touched on and how we could further the discussion into action.”