Two non-chefs duke it out in a bitter (and potentially food-poisoning-inducing) culinary battle | The Food Network is a veritable hotbed of competitive cook-offs, none as entertaining or absurd as one of its most popular shows, Chopped. For the unacquainted, Chopped forces professional chefs to cook gourmet meals in 20 to 30 minutes using four secret ingredients, which are hidden in the infamous “mystery basket.” 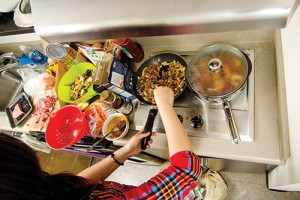 The Food Network is a veritable hotbed of competitive cook-offs, none as entertaining or absurd as one of its most popular shows, Chopped. For the unacquainted, Chopped forces professional chefs to cook gourmet meals in 20 to 30 minutes using four secret ingredients, which are hidden in the infamous “mystery basket.”

Sure, Chopped is intense, but those snobs have world-class facilities complete with ice cream makers, mandolins, pressure cookers and pantries stocked with a bizarre and comprehensive list of complementary ingredients. If you want a blood orange then, by God, there will be blood orange.

Most of us will never operate a blast chiller or clean a squab. But most of us still have the luxury of an oven, four burners, a spice rack and various kitchen accoutrements. No, it’s not “Kitchen Stadium,” but it will do just fine.

The Vanguard deigned to find out. Erick Bengel, our eminent editor-in-chief, descended from his lordly perch and tossed aside his slow-roasted mutton leg to issue an edict: Photo Editor Kayla Nguyen and I were to enter the nearest “den of iniquity” (he meant “dorm”) to “cook a meal of common food.”

Lord Bengel couldn’t be bothered to come—he said something about lazily eating grapes from a commoner’s hand —but Kayla and I entered the Broadway Housing dorm room of Vanguard photographer Daniel Johnston to have a Chopped cook-off, dorm style.

This is what transpired. 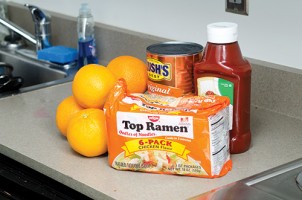 Schroeder’s rigorous selection process culminated in a cryptic text message a mere 45 minutes prior to the culinary showdown. It read: “Here are your dorm kitchen mystery ingredients: ramen noodles, catsup, oranges and baked beans.” And we were off.

I snagged the no-longer-a-mystery ingredients from a local grocer which will remain unnamed (that, incidentally, does not allow photography) and began planning my “menu” as I walked its flash-photography-free aisles. I filled my cart with one bottle of generic ketchup, a 56-ounce can of baked beans, a six-pack of Top Ramen and six navel oranges.

My first thought was to cook the ramen, squirt the ketchup, squeeze the orange and dump the beans into a bowl. I knew that my stomach could handle it. But what of Daniel, the judge, jury and photographer for our adventure? He seemed far more squeamish than I, so I began brainstorming a more edible entree. 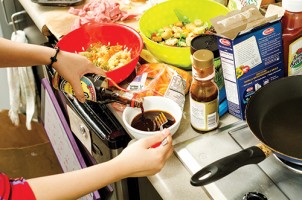 Kayla and I were both held to a strict $20 budget. I purchased two limes, a head of cabbage, one red onion, one carrot, a clove of garlic, one red bell pepper, two kaiser rolls and two thin slabs of pork. (They were out of mutton.) My menu, formulated while frantically prowling the aisles, cost a grand total of $7.98. I gave the rest of my $20 to a nice bearded man who was offering a “good time.” (Just kidding, accounting department.)

As I shopped downtown, Kayla perused the aisles of a supermarket across town. As I chose my ingredients I could feel her Eye of Sauron-like gaze. She would be a formidable
opponent.

Manipulating the foodstuffs with fire

We arrived at Daniel’s dormitory, and I took the lay of the land: a mini-fridge, sink, microwave and two-burner stovetop comprised our cookery. The kitchen area was cramped, though I found enough space for our “pantry”: Sriracha, vegetable, sesame and olive oil, rice and balsamic vinegar, soy sauce, Worcestershire sauce and a standard spice rack like you’d find at Fred Meyer. 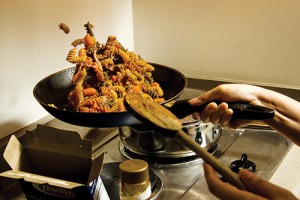 Kayla arrived with her groceries in tow and we set the timer: We’d have 35 minutes to prepare, cook and present Daniel with something edible. His primary concern was avoiding food poisoning, which I took as a vote of confidence.

I created a “marinade” of baked beans juice, ketchup, Worcestershire, Sriracha, olive oil and cajun seasoning, and threw the sliced pork into it. It marinated for all of two minutes before I had to throw it in the hot pan. As it sauteed, I was able to gauge my competition: Kayla thought that creating two separate dishes—a salad and a stir fry—would sway Daniel, and she worked at constructing a salad while water boiled for her noodles.

As the pork cooked, I started chopping veggies for what I was calling my “Asian slaw”: cabbage, onions, peppers and raw, crunchy ramen in a vinaigrette of orange juice, lime juice, olive oil, soy sauce and rice vinegar. Not bad, right?

I added some sliced onions and peppers to the pork and all my ingredients got good and coated in the baked bean/ketchup mixture. (Hungry yet?)

Once I had completed my slaw, I tossed it in the mini-fridge to let it get more slaw-y. Kayla’s noodles were cooked, and she added the tricolor rotini to a saute pan with oil, sliced beef, ketchup and a bottle’s-worth of store-bought stir-fry sauce. (Not to nitpick, but Kayla used store-bought salad dressing and store-bought stir-fry sauce, which think would appall the Chopped judges. If “making a salad” involves throwing ranch on vegetables, then I can make the shit out of a salad.)

As our concoctions sauteed on the stove, I grew confident: Surely Daniel, the dorm denizen himself, would select the homemade dinner free of premade sauces that are so very un-Portland. Surely he would see that I am awesome, right? (Pretty good contrived suspense, right?)

Determining the superior preparation of the foodstuffs

As Daniel sat and contemplated our two finished dishes, he reiterated that his primary concern was dodging food poisoning. He asked if my pork was cooked through, and I replied in the haughty manner in which I’m accustomed to speaking.

“Of course,” I said, rolling my eyes as dramatically as possible.

But wait: Kayla’s dish lacked two of the mystery ingredients! She hadn’t incorporated the ramen or the baked beans, which, as an avid Chopped viewer, I knew meant certain disqualification. Even if Daniel spent the rest of the night on the toilet because of my meal, I was pretty sure I had to win. Rules are rules.

Daniel tried my meal first, which I had christened the “Spicy Pork Sandwich with Asian Slaw.” He looked ill as he picked it up. After a trepidatious bite he offered his analysis: “It’s not as bad as thought it would be. It tastes better than it looks.”

Huzzah! I know a compliment when I hear one, folks. Crown me king. Let’s do this thing.

As he continued eating, Daniel said that my slaw was “pretty crunchy.” A few bites later, he added, “still pretty crunchy,” before offering his final verdict on my meal: “I think ‘crunchy’ was your main idea when it came to your food. Your coleslaw is definitely more edible than your sandwich.” (Again, I’m not questioning the validity of our inimitable judge, Daniel, but are there really levels of edibility? Aren’t things either “edible” or “inedible”? Also, and this is a total coincidence that I’m mentioning this now, did you know that Kayla is Daniel’s boss? Pretty interesting, right?)

Next, it was time for Daniel to try Kayla’s meal. His premeal statement boosted my confidence a bit. “God, give me strength,” Daniel said as he stared at the plate of noodles that Kayla had garnished with a generous portion of black pepper. Kayla had not named her meal, so I took up the task: “Tri-Color Beef Noodle Ketchup Pepper Pile Surprise.” Sounds gross, yes?

Tell me about it.

“It’s all right,” Daniel said as he chewed on the (probably either under- or overcooked) noodles, the (store-bought) stir-fry sauce and the (potentially life-threatening-raw) meat of my competitor.

“I like my burgers and steaks a little pink, but this is a little too pink,” Daniel said. “It’s cold.”

“Crunchy beats cold every time,” I told myself, rubbing my hands in anticipation of the nonexistent prize money and utter lack of formal recognition.

Daniel tried the (store-bought, probably high-fructose-corn-syrup-filled and super-processed-ranch-dressing-drenched) salad next.

“As expected, it tastes as salad should taste,” Daniel said.

As he munched on the salad, Daniel came to a decision.

“Kayla wins,” he said, as the world gasped in disbelief. Dumbfounded, I asked Daniel for an explanation, which he offered after a lengthy pause.

“Hers wasn’t as crunchy,” he said.

So there you have it: I lost to a competitor who used half the mystery ingredients and lathered her food in processed, store-bought swill. (Sorry, Kayla. I don’t mean to throw you under the bus, but the bus is there for a reason: to throw cheaters under. Boom!)

I had planned a denouement on the vagaries of cooking in confined spaces, on how one must muster inspiration to craft a delicate masterpiece amid the pulsating sounds of coitus and dubstep and the scent of Axe and weed smoke—of how, even in a dormitory, culinary magic can happen, blah blah blah.

But instead I will say this: I was robbed. If you want a more “objective” account of the Vanguard’s inaugural Chopped: Dormatorium, then look somewhere else, because this is my byline, damn it.

Sometimes history is written by the loser.

Don’t let holiday the holiday travel blues get you down