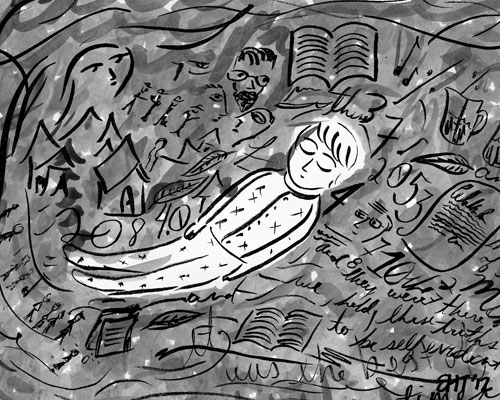 Most college students can attest to the allure of a soft, warm bed.

Sleep is hard to come by, and with social obligations and 8 a.m. classes, getting a good 7–8 hours in every night seems nearly impossible. But a new study out of the University of Notre Dame is giving students more reason than ever to abandon the all-nighter altogether.

Most college students can attest to the allure of a soft, warm bed.

Sleep is hard to come by, and with social obligations and 8 a.m. classes, getting a good 7–8 hours in every night seems nearly impossible. But a new study out of the University of Notre Dame is giving students more reason than ever to abandon the all-nighter altogether.

Rather than spending hours pounding facts and figures into one’s head, this study found that retention increased when one slept shortly after receiving or reviewing new information. Specifically, it found that one’s declarative memory—the memory devoted to discrete facts, such as dates, definitions, etc.— improved based on how soon one went to sleep after receiving the information.

This new data is not particularly surprising, but students often ignore this advice. And when class is at 8 a.m., who can blame them? It’s easier to study early than to devote one’s nighttime hours to drilling oneself on who thought what and where they lived.

How this memory retention works is fairly simple. The Rapid Eye Movement cycle of sleep (commonly referred to as the REM cycle) is a time of intense mental activity. Although the sleeper is not aware of what’s going on, the brain spends this cycle consolidating the experiences and knowledge attained during the day into long-term memory.

Obviously, not all information is converted to long-term memory; the brain has its own filter to determine what makes the cut. Events occurring closer to bedtime are fresher in the mind, so they are typically conserved with greater clarity. This is why it’s easy to remember what you had for dinner yesterday, but breakfast from that same day is a total mystery.

In order to optimize memory, studies suggest that studying about an hour before bed and then sleeping 7–8 hours is best. Ideally, this would be at a regular time and for a consistent duration every night; irregular sleep patterns can lead to unpleasant side effects, ranging from fatigue to anxiety to (in extreme cases) indications of schizophrenia—not the most positive things for a college student to go through.

Notre Dame’s study did not address the issue of napping, nor did it look into the effects of polyphasic sleep schedules (for example: sleeping two hours, staying awake four hours and then sleeping again). However, outside research has indicated that one REM cycle is sufficient to improve declarative memory, albeit if it is a regularly scheduled part of sleep. One full cycle takes about 90 minutes to complete.

As for polyphasic sleep, numerous studies have indicated that it can lead to physical and mental fatigue if done excessively; a two-phase sleep schedule is the safest polyphasic sleep, but a full night of sleep is widely accepted as safest all-around. So for those considering this as a method of optimizing their studies, I wouldn’t advise it.

Notre Dame’s findings also don’t suggest any methods for improving procedural memory, which is the type of memory that enables people to complete a task without thinking through each step. For example, most adults can type on a keyboard without having to seek out and identify each key before they press it; however, this ability is only developed after months (sometimes years) of practice.

Some studies have suggested that procedural memory may be enhanced by spaced repetition, or performing the task at intervals rather than devoting a large chunk of time to practicing it at once. So if you need to learn to plot out variables on a fancy calculator, for example, it might be better to plot out a set once per hour over the span of four hours than to plot four sets in one hour.

Notre Dame’s study didn’t exactly tell the scientific community anything new. It simply reinforced the findings of previous studies, which is often what studies are designed to do: independently determine whether one’s findings are accurate or not. In this case, Notre Dame’s findings supported those of every other study on the subject.

Nevertheless, Notre Dame’s research is useful. Sleeping after studying is a logical course of action, and it could help students to be more efficient in their studies.

Give it a try this term and see how it goes.