Let’s say you have two identical buildings, side by side. The only difference? One has a green roof that absorbs rainwater, insulates the building and provides habitat for wildlife in the inner city. The other has a conventional roof.

Let’s say you have two identical buildings, side by side. The only difference? One has a green roof that absorbs rainwater, insulates the building and provides habitat for wildlife in the inner city. The other has a conventional roof. 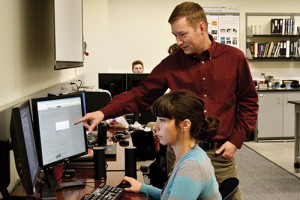 Which is more efficient?

David Sailor, a professor in the Mechanical and Materials Engineering Department and the director of the Green Building Research Laboratory at Portland State, has created a tool that will compute the answer.

Sailor created a Green Roof Energy Calculator, which allows the user to find out if a green roof would be more sustainable and efficient than a conventional roof in its place.

“[The calculator] is designed for developers, new green roof, people who are interested, and for researchers to understand the effects of green roofs,” Sailor said.

“Back in 2003, the City of Portland asked, ‘What would happen if we were to reroof all of the buildings in central/East Portland?’” Sailor said. They were looking for ways to reduce the impact of storm water and energy consumption and, ultimately, find a way to measure success.

“It became apparent that there was no suitable approach to green roof energy. I saw an opportunity…and decided to do something about it.”

Sailor set out to create software that would determine if a green roof would be energy-efficient for any given building. With the creation of the initial EnergyPlus program, researchers could simulate ecoroofs and surrounding effects. They ran 8,000 building simulations from 100 different climates, with another focus on residential buildings versus office buildings.

“We did initially only new construction (buildings constructed post-2004). In most cases, the performance of the green roof had a modest impact,” Sailor said, explaining that other components can contribute to a building’s efficiency, such as computer or electronic usage, the amount of people in the building, air flow, etc.

In 2007, with all of these modules and examples in the data system, Sailor, alongside faculty from the University of Toronto and graduate students from PSU, created the calculator, which takes into account several different factors: whether the building has a black or white roof, the location, the total area of the roof, the type and age of the building and the desired thickness of the green roof.

Sailor was also interested in whether a green roof had the capacity to keep cities cooler—impacting what’s called an “urban heat island,” an area of a city with higher temperatures.

For the initial trials they used two different types of roofs as the control: white and black. The two different roofs absorb different amounts of energy based on the amount of sunlight in that particular climate. They then began to ask: How does a green roof affect heat energy? They found the green roof to be more efficient most of the time.

“With an ecoroof, all we’re doing is elevating that space up to the sky. We’re not taking away a resource but relocating it,” Parker said. Indeed, ecoroofs provide the same amount of area, just not on ground level.

“I believe green roofs are an essential tool to the PSU community. It’s a worthwhile investment for the community to make,” he said. “The long-term benefits outweigh the costs, and they add to the visual component of PSU being a pioneer of sustainability.”

Mechanical engineering graduate student Max Gibson, who works with Sailor on the project, believes the calculator is important because it allows people without significant knowledge of building energy modeling practices to measure the benefits of a green roof.

“The better accessibility may encourage some people to be thinking about green roofs—and green building practices in general—where they may have felt this topic was too intimidating or complex before,” Gibson said.

He also believes the tool’s creation should be a point of pride at PSU.

“Let’s not forget that this tool is hosted at PSU, helping to solidify PSU’s place in the worldwide green building community,” Gibson said. “This calculator demonstrates that the university is quickly becoming a leading player in the very important field of research.”