We often use hyperbole to sell sports. A close game characterized by defense becomes a dogfight; a late-round playoff matchup between the top seeds is a war. Battle references occur more frequently during sports programming than sports references at political rallies.

We often use hyperbole to sell sports. A close game characterized by defense becomes a dogfight; a late-round playoff matchup between the top seeds is a war. Battle references occur more frequently during sports programming than sports references at political rallies. 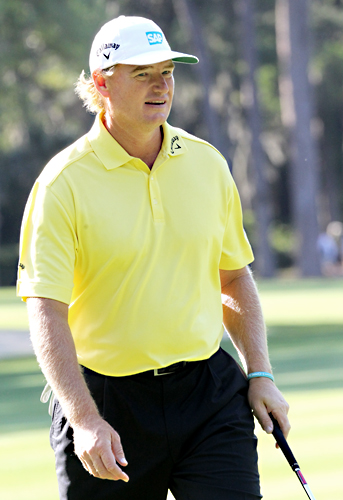 Sometimes it’s less subtle than it needs to be, but it’s a way to both dramatize and humanize an otherwise fairly straightforward contest of skill and stamina—one of those crucial elements of the package that help sports become entertainment. Fans aren’t paying for a demonstration; they’re paying for a struggle. On Sunday, Ernie Els struggled, and when it was over he had won the Open Championship. The hyperbole, however, eluded him.

In golf, the more visceral descriptors are conspicuously absent from the show, mainly because there isn’t much place for them. There is a struggle in golf but no battle, a victor but no foe. The action is quiet and polite, every quirk and custom played out in the interest of restraint.

Participants compete against an entire field but are isolated, and except during those instances when a tournament comes down to the final pairing of golfers on the final day (which happens far less frequently than you’d think), opponents remain largely in the periphery.

Luckily, that vague spiritual connection to the battlefield is not the product that golf is selling. Competition, after all, is not simply about confrontation. It is about performance in the face of pressure—in this case, the constant, inescapable hum of pressure from a horde of world-class golfers making decisions that the rest of the field has no way of influencing.

Golf, from the first tee to the last, is about pressure. The winner holds steady while his opponents lose control, and for this he is rewarded with victory. Golf is a starched-collar re-enactment of “The Tortoise and the Hare.”

Even in the face of such convincing past evidence, Ernie Els could be forgiven for losing sight of this fact as he went into the clubhouse Sunday. His peripheral opponent that afternoon was Adam Scott, a talented Australian in the hunt for his first major, who began his final round at the top of the leaderboard and had played all weekend like the tournament’s tortoise.

Els, on the downside of a stellar career that included three majors, had only recently begun to find his form again after long periods of inconsistent results, and he was a fair distance off the lead when he sank his last putt.

The Aussie needed to bogey every one of them down the stretch in order for Els to win, and to his own detriment, he obliged. During a sequence that spilled no blood but was consistently uncomfortable to witness, Scott lost control in compressed time, first with a shrug, then with mild concern, transitioning quickly into outright panic, and finally as a glazed and helpless bystander who could only watch as his good work over the previous four days was leveled before him.

Adam Scott was the tortoise for most of the tournament, until suddenly he wasn’t. And then it was over.

So, Els was in the clubhouse when he won his second Open Championship, collecting his fourth major about an hour after he had left the course for good, the outcome decided by the golfer on the screen in front of him. It was his first major in 10 years, an abrupt and unlikely turn of events that he got to watch right along with the rest of us.

This year’s Open Championship was decided as much by Els’ strong finish as it was by Scott’s grim collapse; the two events just happened to coincide. Ernie Els defeated an opponent he never saw in person, and Adam Scott lost to the scoreboard. But there was definitely a victor, and if we can be sure of one thing, it’s that the defeat was incredibly painful.