If you’ve attempted the iconic en pointe ballet technique, you know how difficult it is to maintain a center of mass on tiptoes.

To learn how dancers do it—how they lift each other bird-like in the air or perform the fouetté en tournant—ballet connoisseurs and science geeks alike gathered with microbrews and pizza in the Bagdad Theater on Wednesday for the OMSI Science Pub event, The Physics of Ballet.

If you’ve attempted the iconic en pointe ballet technique, you know how difficult it is to maintain a center of mass on tiptoes. 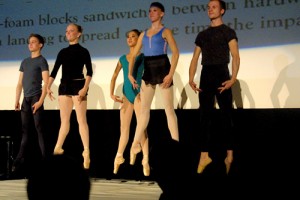 To learn how dancers do it—how they lift each other bird-like in the air or perform the fouetté en tournant—ballet connoisseurs and science geeks alike gathered with microbrews and pizza in the Bagdad Theater on Wednesday for the OMSI Science Pub event, The Physics of Ballet.

The event was co-hosted by William Porter, Lester Lampert and Justin Dunlap, three Portland State graduate physics students, who were joined by Anne Mueller, the artistic coordinator and a former dancer for the Oregon Ballet Theater. 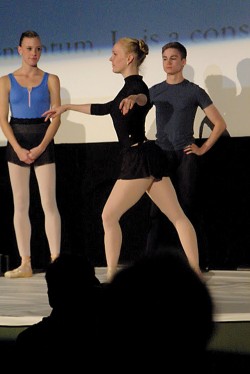 The presentation was one of many Science Pubs to be held around Portland in coming months.

Porter, Lampert and Dunlap are members of the Science Outreach Society, a nonprofit student group that seeks to engage general audiences in scientific concepts.

Audience members hardly ceased to laugh throughout the event, despite the fact that some jokes were strictly scientific and sometimes rather obscure.

SOS held the audience’s attention not just with humor but with trivia and audience participation while they explained Newton’s three laws of motion in relation to ballet.

How do dancers maintain that tippy toe en pointe stance that looks so painful? They maintain their center of mass (the location where a dancer’s mass body weight is concentrated) directly over their toe, so they must have precise skeletal alignment along with years of practice.

Mueller, aided by five recent graduates from the School of OBT (which enrolls students four to 20 years of age), demonstrated the ballet phenomena the physicists explained.

On the most basic level, Newton’s third law of motion when applied to ballet concerns the floor and its impact on the dancers’ joints: for every push, there is a push back.

“The floor is not going to move,” said Mueller. “So dancers use the plié [bending of the knees] to absorb the shock,” or to lessen the floor’s push back.

Porter and Dunlap demonstrated the principle with an egg, tossing it back and forth across the stage.

“I will extend the amount of time over which the collision [of the egg against my hand] occurs,” Dunlap said.

He lowered his hand in relation to the descending egg as it arched in a parabolic curve toward his palm and finally landed there softly.

If Dunlap were instead to have kept his hand still so that when the egg hit, it hit hard and cracked—well, that would demonstrate the impact of the floor on a dancer’s unbent knee.

Like little basketballs, they each jumped in turn and dipped toward the stage, fluidly bending their knees upon landing, then popped back upright. Using the plié, they prevented undue stress to their joints.

Conservation of angular momentum is a key bit of lingo in the ballet world. Angular momentum is a dancer’s rate of spin multiplied by their moment of inertia, which is basically their spinnability. To spin faster and longer, dancers pull their limbs inward.

The SOS physicists demonstrated this easily using a spin-top stool with exceptional bearings that Porter sat atop and had spun by his comrades. Arms out, Porter turned slowly. Arms tucked near his torso, his rate of spin increased.

One of the most affecting ballet phenomena is the grand jeté —that iconic straightforward leap off the stage that gives the illusion a dancer is floating midair.

A trick of the eye, it is effected by a dancer’s unyielding center of mass as they leap with one leg suspended out front and one jutted behind. Arching in a fixed parabola through the air, a dancer lifts her arms, legs and head at the jeté‘s utmost height so that her torso moves perfectly horizontal for a moment and viewers endow her with incredible “hang time.”

Though dancers at the Science Pub did not demonstrate the grand jeté due to the small stage, a ballerina did perform an excerpt to crackling music that eventually broke altogether so that she was left dancing to silence and good-humored audience laughter.

At the event’s close, Mueller audaciously bid the audience farewell: “Hopefully all you science geeks are now inspired to go to the ballet!”

The next OMSI Science Pub, The Science of Beer, will be at the Bagdad Theater Monday Nov. 5.

TV Party – The hidden treasures of Comcast On Demand