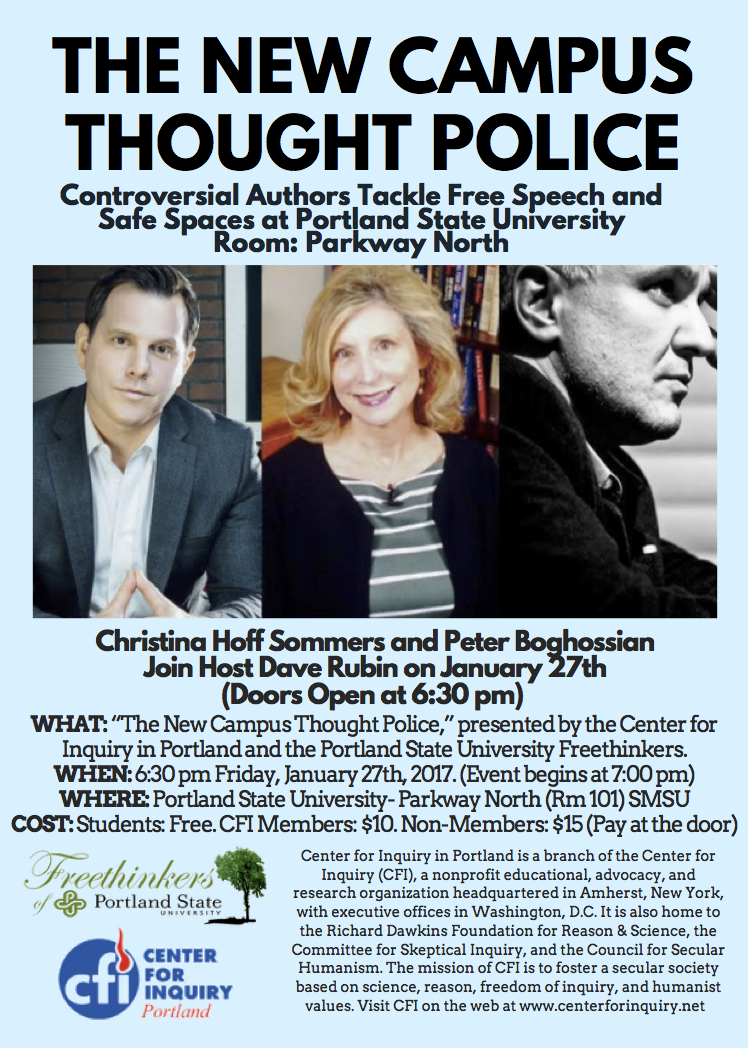 Two brilliant and uncompromising thinkers, bestselling author Christina Hoff Sommers and Portland’s own Peter Boghossian, will share the stage on January 27th with political comedian and host Dave Rubin for a live “fireside chat” on the hot-button issues of speech, gender, and culture at PSU.

“The New Campus Thought Police” will be presented by both the Center for Inquiry in Portland, as well as Freethinkers. The event will feature honest and unfiltered conversation about the controversial subjects of free speech and political correctness on college campuses. This will include issues such as microaggressions, trigger warnings, safe spaces, cultural appropriation, victimhood culture, and more.

Dave Rubin of the political talk show The Rubin Report will moderate the discussion with Sommers, a scholar with the American Enterprise Institute and critic of contemporary feminism, and Boghossian, a philosophy instructor with Portland State University and a passionate advocate for free speech and against political correctness.

This 45-minute conversation will be followed by a 30-minute audience Q&A.

Christina Hoff Sommers is a resident scholar at the American Enterprise Institute. She is the author of such books as Freedom Feminism, Who Stole Feminism?, and The War Against Boys. Her articles have appeared in publications such as The New England Journal of Medicine, The Wall Street Journal, The New York Times, The Washington Post, The New Republic, and The Atlantic.

Peter Boghossian is an assistant professor of philosophy at Portland State University. There, he teaches courses in Critical Thinking, Science and Pseudoscience, the Philosophy of Education, and Atheism. He is the author of the book A Manual for Creating Atheists. He led the development of the mobile app Atheos, designed to help atheists have constructive discussions with religious believers.

Dave Rubin is a comedian and talk show host, currently hosting The Rubin Report, where he interviews thought leaders, authors, comedians, about politics and current events.

Want to get the CFI member discount? Join here: http://www.centerforinquiry.net/support_cfi_portland/