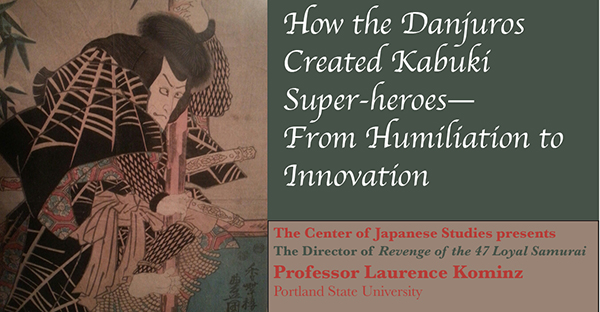 The PSU Center for Japanese Studies and Portland State of Mind present Professor Laurence Kominz, Director of “The Revenge of the 47 Loyal Samurai, and Professor of” Japanese at Portland State University.
What: How the Danjuros Created Kabuki Super-Heroes – From Humiliation to Innovation

Cost: Free and open to the public

PSU’s Professor Laurence Komniz will illustrate how The striped face make-up, outlandish costumes, and dynamic poses of aragoto (bravura) kabuki acting are iconic images of the art, recognized by every Japanese as KABUKI. In fact there are many different visual styles and acting conventions within the sub-genre of aragoto, super-hero kabuki, a subgenre best represented by the “Eighteen Great Plays of Kabuki.” When we examine closely, we find most important innovations were stimulated by actors failing to impress audiences after assuming the vaunted and coveted name of Ichikawa Danjûrô. In a highly competitive commercial environment, in which repeated failure meant unemployment, aragoto actors were forced to “innovate or die.” Kominz explores the artistic creativity that this cutthroat world engendered in a presentation full of images from ukiyo-e prints and video clips of kabuki’s finest actors on-stage – and a few of our own, fine student actors as well.

Dr. Laurence Kominz is a Professor of Japanese Literature and Drama at Portland State University.

His books include The Stars who Created Kabuki: Their Lives, Loves, and Legacy, Avatars of Vengeance: Japanese Drama and the Soga Literary Tradition. He serves as Japan editor for Asian Theatre Journal and referees book manuscripts on Japanese drama for several publishers.

A student and performer of nihon buyô and kyôgen, he directs student productions of kyôgen and kabuki at PSU and as a guest director at other colleges. In 2016 Dr. Kominz directed the epic kabuki play, The Revenge of the 47 Loyal Samurai at PSU.