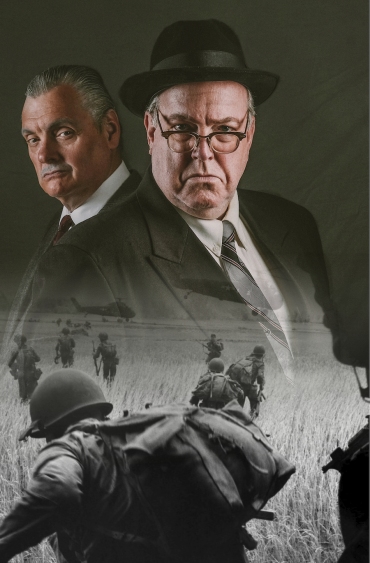 August 2014 marks the 50th anniversary of the Gulf of Tonkin resolution. Bellingham TheatreWorks is touring a 60-minute theatre piece called The Ghosts of Tonkin, a drama about Wayne Morse and the origins of the Vietnam War. The play premiers in Bellingham and then tours to Portland and Eugene.

This award-winning play dramatizes the behind-the-scenes story of how seemingly well-intentioned public officials brought about one of the most devastating chapters in the history of the United States: The Vietnam War. The Vietnam War devastated two countries, toppled the President of the United States, and killed two million people. And one man tried to stop it before it began, Oregon’s Senator Wayne Morse.

In 1964, Oregon’s Senator Wayne Morse was an outspoken critic of the Gulf of Tonkin Resolution that authorized military intervention in Vietnam. Senator Morse was one of only two congressmen to vote against the resolution.

The Ghosts of Tonkin is based on telephone conversations, senate transcripts, recently declassified NSA documents, and other sources. In addition to Wayne Morse, characters include LBJ, Robert McNamara, Dean Rusk, William Fulbright, as well as several fictitious characters.

In August, 1964, our smoldering involvement in Vietnam was ignited into all out war when the North Vietnamese attacked a US destroyer in the Gulf of Tonkin. But it was later revealed that the alleged attack, in fact, never happened. When the Iraq War began, people drew an analogy between the genesis of that war, and the beginnings of the Vietnam War. This made playwright Steve Lyons curious to learn more about the origins of the Vietnam War. That curiosity led to Wayne Morse and to this script.

The performance in Portland is September 27 at 7:30pm at Lincoln Hall on the Portland State University campus. 1620 Southwest Park Avenue. Tickets are $20 (including service fee) and are available at the door, or online at http://www.pdx.edu/boxoffice/tickets/or by calling 503-725-3307.

Every performance is followed by a post-play discussion. In Portland, the post-play discussion panel includes playwright Steve Lyons as well as Joe Smith, a former member of Morse’s staff. The panel also features Vietnam vet David Leverenz, who served on the destroyer Turner Joy.

The Ghosts of Tonkin is presented in association with the Wayne Morse Center of the University of Oregon.