Vanguard staffIf singers, dancers and comedians aren’t enough to get you to go check out this weekend’s ShowKase from PSU’s Kaibigan club, maybe free dinner will do the trick. 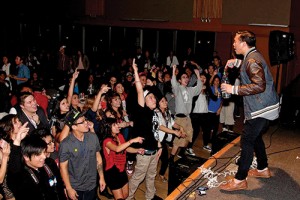 If singers, dancers and comedians aren’t enough to get you to go check out this weekend’s ShowKase from PSU’s Kaibigan club, maybe free dinner will do the trick.

Admission for students is free, and includes a Filipino dinner with lumpia (eggrolls), afritada (rice noodles) and more served before the show.

“We invite everyone—that’s why we do this,” said Aiman Al Khachi, the club’s publicity coordinator.

While the event is focused on Filipino culture and participation, the event is open to the public, with the goal of drawing a bigger crowd each year. Last year, the club set an attendance record of at least 400. The first ShowKase brought in approximately 200 people and has grown significantly every year.

The ShowKase is just what it sounds like: an opportunity for Filipino students affiliated with the club to demonstrate their personal performance talents. The acts themselves are not focused on Filipino culture but are a demonstration from and celebration of Filipino students.

The ShowKase also serves as a fundraiser for the PSU Filipino American Student Association Scholarship fund.

“We get a lot of sponsors from the community,” said Kaibigan President Nikki Deleon. While there are funds raised with each ShowKase, the majority of funding for the scholarships comes from outside sponsors.

“It’s planned entirely by new students, with new ideas and new themes every year,” Deleon said. Lastyear the theme was based on Filipino colors; this year the theme is glow-in-the-dark.

The two headliners this year are local Rex Navarrete, a well-known comedian in the Filipino community, and Seattle-based singer Shannon Lei. “We try every year to get Filipino talent as our headliner,” Deleon said.

Previous headliners have included several “raptivists,” as Deleon describes them: rappers who use hip hop as a tool to send out messages about social justice and awareness.

Jazz Espiritu, a singer/songwriter from Bellingham, Wash., explains that this

year’s ShowKase is a little different. Last year there was “only one member from outside the PSU community. There are more this year, so I’m really excited to be performing with lots of friends from the University of Washington. It’s going to be an awesome show.”

“I’ve learned to hone in on my stage presence and to feel the crowd—and I love the PSU crowd,” Espiritu said. He also speaks well of some of the other performers, including PSU student Haley Heyndrix, who he believes will “blow us all away.”

Espiritu will also be selling his original music album, titled Reality EP, after the show.

Keanu Corveau, the social chair for Kaibigan, explains that he’s excited for the ShowKase because “the event exposes a lot of local talent from the Portland area as well as those from the Northwest region.”

Look for collaboration and performances from many others from around the Northwest Filipino community, including those who attend high school locally.

“We try to make it fun for everyone,” Al Khachi said.

You can get tickets at the PSU Box Office in SMSU. The event is held in the Smith Ballroom. Tickets for students are free with an ID; general admission is $10 in advance, $15 at the door. Doors open at 5:30 p.m., dinner is served between 6 and 7 p.m., and the ShowKase begins at 7 p.m.

Athelete of the Week: Garyn Schlatter

Chickens are on front lines against West Nile