Throughout their first season the LumberJax have been continuously making history as Portland’s professional lacrosse team, but after they felt the wrath of the Arizona Sting they were history. On Saturday night the Sting promptly defeated the Jax by a score of 14-11 in their first playoff game, leaving the LumberJax players and the 10,843 faithful that packed the Rose Garden looking forward to next season.

In their first season of existence the expansion LumberJax played like they had been together for an eternity. They clinched a playoff birth with a couple of games left in the regular season, became the first expansion team to win their respective division and tied for the best record in the National Lacrosse League at 11-5.

Once the Jax finally played on the postseason stage they were brought back to reality by a more explosive, experienced and all-around better Arizona team. Arizona’s flawless play caused Portland and their fans realize that they are an expansion team and that their best chances to win a championship are ahead.

“It has been a tremendous year,” said head coach Derek Kennan. “We won a regular season division title and tied for the best record in the league. So, what can you say about the success of the team, it has been a heck of a ride for us. But, unfortunately it didn’t end the way that we wanted.”

Coming into the game the Jax were aware of the recent success the Arizona Sting had enjoyed. The Sting are just one season removed from an appearance in the NLL Championship Game, where they were defeated by the Toronto Rock by a score of 19-13. After the loss the team remained nearly completely intact, only losing a couple of their players to the expansion draft and trades.

Even though Portland had split the season series with Arizona at a game a piece and the Jax were the number one seed, they were still considered underdogs many around the league. In a single elimination playoff format experience is vital, on Saturday it was apparent who had it and who needed a bit more.

“Before the season I expected us to make the playoffs, but I didn’t think that we were going to win our division and have the number one seed,” Kennan said. “We just came up a little bit short in the playoffs. One game knock out, one game they came to play and played an extremely good game. They were just a little bit better than us tonight, marginally better.”

The second quarter was definitely the downfall of the Jax. During the second quarter Arizona turned up the heat by outscoring Portland 4-1, which quieted the once rabid Rose Garden crowd and caused the Jax to play catch-up the remainder of the game. This was the point in the game where the Sting illustrated that they were the more experienced, dominant team and the Jax simply couldn’t contend with their brand of lacrosse. After the second quarter the Jax played strong and physical, but it was to no avail because Arizona was simply more experienced and at least on this night a better overall team.

Arizona’s most prominent factor in handily defeating the Jax was the great goaltending of Rob Blasdell. Portland had a total of 52 shots on goal and Blasdell accumulated 41 saves, often making amazing saves on consecutive shots by the LumberJax. He definitely was the difference in the game and deserves the majority of the credit for the result due to his ability to completely shutdown Portland’s best opportunities to score. Whenever the Jax had a breakaway or prime opportunity to score Blasdell would shut the door by making a fantastic save.

“We expected to advance and make a run for the championship but we ran into a really hot goalie, that is the best I have seen,” said defensemen Brodie Merrill. “We also got off to a very slow start. I think we were a bit nervous in the first few quarters. My hat is off to them. They made it to the championship game last year for a reason and it this is essentially the same team. So, it was a good battle for us tonight and we will learn and get better from it.”

Keenan credited Blasdell with very effective goaltending, but thought that Portland’s inability to score was more of a result of poor placement on the part of his team.

“He played well but we had a lot of opportunities,” Keenan said. “We through a lot of our shots right at his belly pad. The story of the night was that we had plenty of good chances but he just played well.”

In the final minutes the Jax gave the fans another reason to cheer when Mike Hominuck scored his fourth goal of the game to reduce the Arizona lead to only one. For a moment it seemed as though this Cinderella story was going to continue into the Western Division Finals.

Much to the dismay of the vociferous fans, Arizona forward Lindsay Plunkett ruined all chances of another playoff game for the Jax when he fired a shot by Portland goalie Dallas Eliuk to score his third goal of the game. With this one goal the LumberJax season was over and the story of the expansion team that was on their way to winning the league title had its final chapter written – until next year. 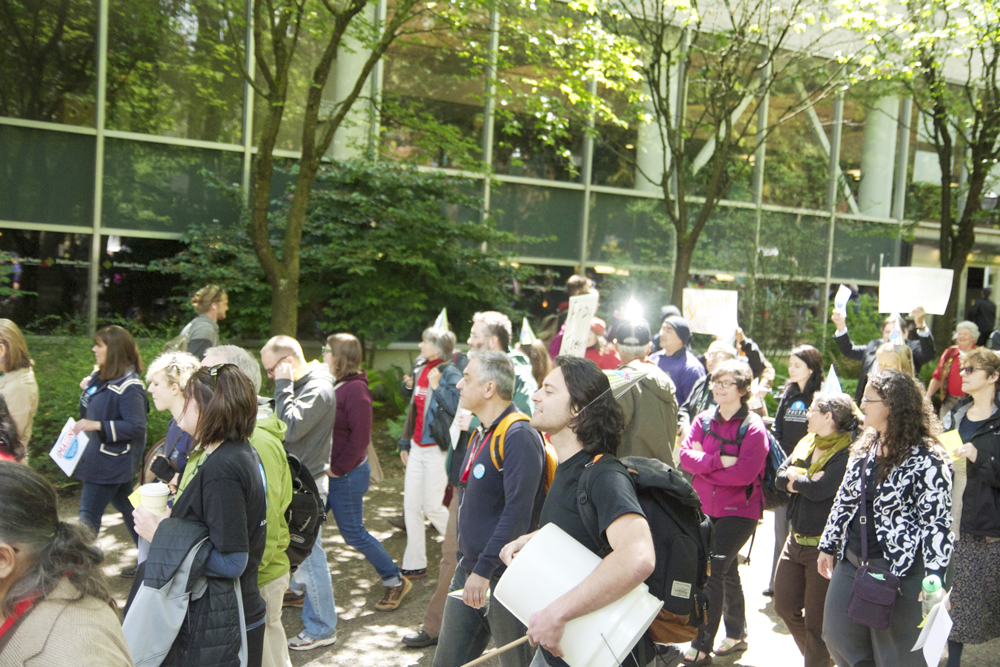 AAUP kicks off bargaining with “Imagine”