November and December are doubleheaders for gluttony. Between indulging in holiday hams, puddings and pies and a heaping dose of joyous drinking, it’s about time for some serious body recovery. 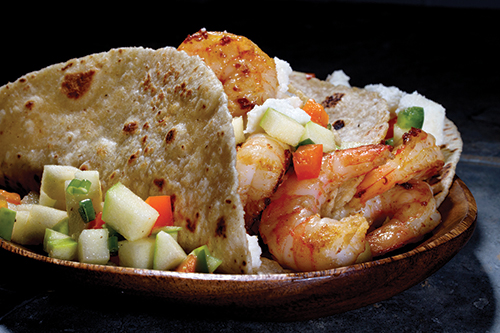 Spice without the price: These spiced shrimp tacos pack a major flavor punch while keeping the calorie count low. Photo by Karl Kuchs.

November and December are doubleheaders for gluttony. Between indulging in holiday hams, puddings and pies and a heaping dose of joyous drinking, it’s about time for some serious body recovery.

But starving your body on extreme diets or fasts to combat the weeks of feasts is setting yourself up for failure. By making small adjustments to your everyday eats, 2013 can be the year of a happier and healthier you.

The average American omnivore doesn’t get nearly enough fruits and vegetables in his or her diet. We are a carb-loving country and proud of it. Make a conscious decision this year to boost your vitamin intake by packing your meals with local produce.

Get creative by finding ways to use fruits and vegetables as your eating vessel: Switch chips and dip for chopped veggies and hummus, or trade cheese spread and crackers for sharp cheddar and apples. Instead of stuffing taco fixings into a flour tortilla, pack them into a baked bell pepper.

Our brains form habits over the types of food we consume regularly, so the more often you opt for a healthier choice the more your body will crave it.

Another common mistake is reaching for the low-cal option at every opportunity. This is
particularly true when it comes to drinking. Light beers boast few calories, but they lack the flavor gratification your tongue really wants.

Instead of knocking back a few pints of the light stuff, enjoy smaller servings with the higher satisfaction of a local craft brew. Some full-bodied beers are even better for you than the lighter chuck. A pint of Guinness has more vitamins and fewer calories than most of its lighter competitors like Coors, Sam Adams and Budweiser.

It’s relatively easy to make minor dietary changes, and your body and brain will reap the benefits of boosted energy.

This spiced shrimp taco recipe is a delicious dinner option that weighs in at around 300 calories per serving. Its savory spices, sweet peppers and apple and cool queso fresco will satisfy your flavor cravings—
all while keeping it light.

Remove spiced shrimp from bag, discard marinade and saute in a pan over medium-high heat for about 2 minutes per side, or until heated through. Finish shrimp with a sprinkle of salt and pepper and set aside in a covered bowl to keep warm.

In a large frying pan over medium-high heat, flash fry corn tortillas with a few drops of oil to desired toasty-ness. Divide shrimp equally among tortillas and top with apple-pepper salsa and crumbled queso fresco. Serve immediately and enjoy!