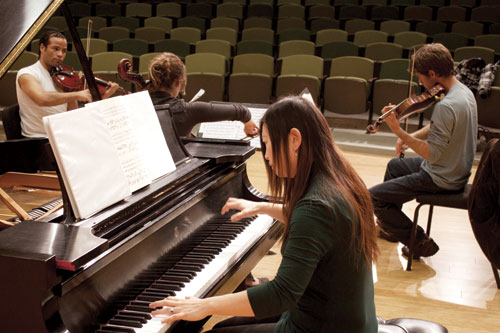 The Portland State Department of Music is focusing on French music this year, and the Los Angeles-based Belden Piano Quartet is taking full advantage during its upcoming visit to Portland.

The Portland State Department of Music is focusing on French music this year, and the Los Angeles-based Belden Piano Quartet is taking full advantage during its upcoming visit to Portland.

For these young musicians, that means performing works they already know and learning new pieces to accommodate the university’s French theme.

“We already have a few French pieces in our repertoire,” said Belden violist Clifton Antoine, who first arrived in Portland to work with the music department in December. “We wanted to play and learn a new one together, so that’s how we decided to do all French music, based on the music school’s focus.”

Antoine has invited his friends and fellow musicians to visit the city, and the Department of Music has given them the opportunity to perform at the Lincoln Recital Hall tomorrow evening.

The quartet will perform three chamber pieces by various French composers of the late 19th and early 20th centuries. Works to be performed include Guillaume Lekeu’s “Unfinished” quartet in B minor, Gabriel Fauré’s “Tempetuous” in G minor and Joaquín Turina’s “Beautifully Lyric” quartet in A minor.

The works express the French aesthetic in music, which Antoine described as having “a softer quality.”

“Even in the more intense moments, there’s a softness to it. Most of the American, Russian and German composers don’t have that light aesthetic,” he said. “Usually, we try to describe music as impressionistic of these composers. Or a better description would be ‘symbolist,’ because the symbolist movement in poetry happened around the same time as these French composers.”

“Fauré is a composer you can easily relate to. His music is very personal and has little reflections that you can relate to yourself,” she said. “Lekeu, to me, seems a little more abstract. You can pretty much think of anything when you listen to his music. It’s all up to the individual personality to be able to determine what it means to them.”

Lekeu, who moved to France from Belgium at an early age to study under the French composers of the time, died at age 23. Only two movements comprise the Lekeu quartet that Belden will perform. That, Antoine explained, is why he refers to it as the “Unfinished” quartet.

“This piece has a dark and stormy presence to it,” he said. “The first movement begins painfully, like your heart is breaking. It’s like 15 minutes long, which is uncommon for a first movement, so you can sense the gravity of it.”

Yi, however, feels closer to the works of Fauré and has played the composer’s works with many other musicians.

“Recently, I’ve been involved in working with vocalists, and there are a lot of pieces written for a vocalist by Fauré, these amazing art songs,” she said. “So it’s really cool, having played Fauré before as part of other quartets, to work with other musicians and see the connections between the composers’ pieces.”

Fauré, according to Yi, communicated his life and emotions directly in his music. The Belden pianist considers the composer’s work to be accessible and rather “in-your-face” on account of its emotional intensity.

“He had a very tumultuous personal life. He was sort of a player and a romantic,” she laughed. “You hear all those things in his music. The quartet has moments of fire and passion and moves to moments of reflection and love. You can hear it in the music, a reflection of his life, and our lives as human beings.”

Belden will begin its performance with Turina’s “Beautifully Lyric” quartet before moving on to Fauré and Lekeu. A Spanish composer who moved to Paris to study under the French masters of the time, Turina effectively wove elements of the French and Spanish styles in his compositions. Antoine described the result as “a combination of French aesthetic with the rhythmic elements of Spain.”

“Spanish music has a heavily triplet rhythm, and you really feel the beat,” he said. “In a lot of French music, you don’t feel the natural pulse throughout the whole piece. With the Spanish style, you definitely feel there’s always a beat there.”

The Belden Quartet got its start in Los Angeles, when the musicians came together by happenstance after studying music together in Chicago at De Paul University. In addition to Antoine and Yi, the group includes Azusa violin professor Alex Russell and cellist Maria Crosby. The quartet is named for the street on which they studied and was described by Yi as a musical labor of love, forged as much by personal friendship as professional respect.

“I think it’s rare to find a chamber group that, outside of the music, really gets along as people,” she said. “We’re just a bunch of people who are good friends who mutually respect one another and love playing together. And we love sharing that with people.” 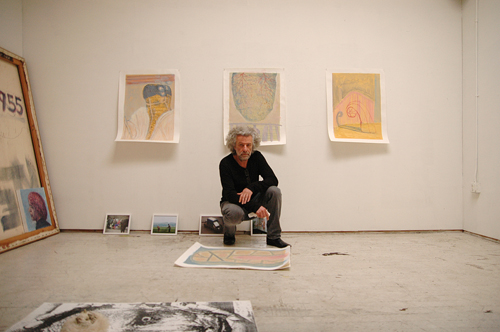 And a happy new year