Moments after the polls closed on election night, it was clear that incumbent City Commissioner Amanda Fritz would remain in office.

Moments after the polls closed on election night, it was clear that incumbent City Commissioner Amanda Fritz would remain in office. 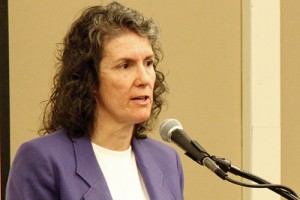 Amanda Fritz was reelected as city commissioner with over 57 percent of the vote.

Fritz beat out challenger Mary Nolan, a member of the Oregon House of Representatives, with more than 57 percent of the vote.

It didn’t take long for Fritz supporters to rejoice.

“Well, obviously, we are very pleased,” said Debra Porter, a spokesperson for the Fritz campaign.

Despite Nolan’s larger campaign war chest, Fritz won most of the county’s voters. Nolan became known for securing strong union backing as well as significant financial donations throughout her campaign.

“It was a close race and Fritz was looking stronger going into Election Day, but it was still tight,” said Chris Shortell, Portland State political science professor.

Fritz and Nolan differed in their view of the Urban Renewal Project in the University District, with Nolan arguing for continued developmental investment and Fritz saying that other portions of the city could better use this funding.

Porter attributed Fritz’s success to her skill in connecting with voters. During the city commissioner debates at PSU, Fritz talked up her responsiveness to inquires and questions from Portland voters, saying she would “respond to every email, every telephone call.”

“It was all about talking to people and engaging Portlanders in conversation, and that is what Amanda excels at and that is how we ran our campaign,” Porter said.

“We know that Amanda has a lot of support, so as a campaign we were never going to take that for granted, because we were up with a very well-funded and well-established candidate with a long history,” she added.

Even though one round of the city commissioner debates were held on the PSU campus, many students were unaware of the race.

“I didn’t follow that race a lot, so I didn’t want to pick at random. I didn’t vote for commissioner,” he said.

Sophomore chemistry major Rod Vidomsky said he was disengaged from the race because he is a Republican and both the candidates were Democrats.

“As long as the United States prospers and gets up from this depression, I personally don’t care who is in office,” Vidomsky said.

Student Amber Kelsall, a political science senior who supported Nolan, was content with the results.

“I thought Nolan coincided more with my ideals as a student, but I am happy for Fritz too. I wish they both could have run for open seats. That would have been ideal.”