The local watering hole you’ve always wanted | There’s nothing better than meeting a group of friends for a drink after a long day juggling school and work. The problem is finding a place that everyone can afford, that offers cheap yet delicious food and that isn’t a food cart.

There’s nothing better than meeting a group of friends for a drink after a long day juggling school and work. The problem is finding a place that everyone can afford, that offers cheap yet delicious food and that isn’t a food cart. 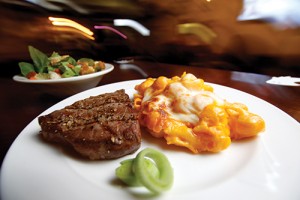 An eatery where you can duck out of the rain and enjoy a pint without having to scream over the music or split an entree because of the price. Where the service is friendly and the atmosphere begs you to stay for just one more drink—maybe two. These were some of the criteria that John Ozimkowski had in mind when he opened Southwest Portland’s newest sports bar, Gnarly Grey.

“What happened to the place where you could get a couple micros and a burger for under 12 bucks in the gnarly, gray winter?” Ozimkowski asked, explaining both his thoughts on planning the bar and the origin of its name.

In a city full of trendy restaurants and overpriced dives, Gnarly Grey’s menu actually caters to the student budget without ditching the quality.

According to Ozimkowski, the last thing he wants his patrons to be thinking is, “Can I afford to be here?”

With a happy hour menu that includes cheesy nachos and pulled pork sliders that don’t exceed $5, you can definitely afford to eat here. I dove into a $3 bowl of macaroni and cheese that Ozimkowski described as “trucker-style mac.” Soaked in Velveeta and covered in baked Tillamook cheddar, each gooey shell was like a time machine to childhood.

My Vanguard coworkers and I teased Marco España for ordering the steak as an appetizer to his burger and chips. But at only $6, he couldn’t resist. “I’m not going to pass up a deal like that,” he said. “I’m not an idiot.”

And neither is Ozimkowski. After only one month of business, Gnarly Grey has accumulated a swath of regulars by creating an atmosphere without social barriers. The place beams with Portland pride, is already throwing fundraisers for PSU associations and encourages camaraderie among its patrons, whether PSU-affiliated or not.

“We love our customers,” head chef Steve Ryan said. “We can’t do it without them.”
So the next time you’ve had a long day, grab a friend, a professor or that cutie you’ve had your eye on and stop by Gnarly Grey. Cheer on the Vikings, jump into a game of interdepartmental darts, play pinball or shoot some pool. Unlike other nearby pubs, you’ll shell out less cash, and your pool cue won’t hit the wall.

A call to arms