Everyone has one of those friends that talks about how “music sucks these days,” and further, how the only good stuff still being made is from established bands. Unfortunately, this mentality seems to infect younger and younger people as time drags on.

Everyone has one of those friends that talks about how “music sucks these days,” and further, how the only good stuff still being made is from established bands. Unfortunately, this mentality seems to infect younger and younger people as time drags on. 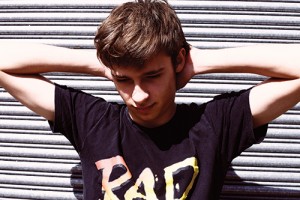 COURTESY OF The windish agency

Gloomy flume:Australian glitch producer Flume chills out in front of a storage unit. His debut self-titled album is out this month on Future Classic Records.

Our parents decided that music wasn’t getting any better when they turned 40. Now you’ll hear people in their late 20s spouting the same tired rhetoric before shutting themselves in their bedrooms with boring Bon Iver records.

Fortunately, the world of music is not so ready to let people commit to terminal boredom. Our friends and relatives need not wait for Radiohead to ooze out another bucket of chum with bated breath.

If you know where to look, music is exciting, and sometimes you really have to dig. Enter Flume, a glitch-cum-synthpop producer from Sydney, Australia, who got his start with free ultra-basic music software included in a box of cereal. With origins as humble as any I’ve ever read, how does the 20-year-old’s eponymous debut fare against a world of stunted musical growth?

For those not into much electronic music, the album may take a couple listens in order to wring out maximum enjoyment. Glitch isn’t exactly the most accessible genre, so for you casual electronic listeners out there, you can be thankful that Flume keeps the glitch elements to a minimum and is liberal with his application of sexy, ethereal vocals.

If glitchy, swirling electronic dreamscapes sound right up your alley, then Flume has your number. If you’ve been listening to glitch for years now, you might want to move along—Flume weaves an entry-level glitch tapestry that may not interest seasoned listeners.

Allow me to take the time to explain what might be the worst element of contemporary electronic music: poor vocal sample manipulation. By poor, I mean severely annoying—and squeaky, double-time, chipmunk-esque vocal samples are the apex of this phenomenon.

Unfortunately, Flume’s record is chock full of chipmunk samples. I attribute this blunder to Flume’s overeagerness as a producer—it seems his eyes are bigger than his proverbial stomach. Flume wants to create a mesmerizing work of electronic brilliance and wants the human voice to act like another synth track, riding and falling at his whim.

This is where the mistakes are made. The human voice works best with glitch music as a salve to the subtle chaos of everything else in the music.

Flume overcomplicates this right out of the gate on the first track, “Sintra.” Luckily, the tracks are short enough (most are under three minutes) not to bury the listener in layers of chipmunk samples.

The beauty of Flume’s intro-to-glitch record is that he doesn’t attempt to toss the listener onto a glitch minefield like Kid606 might. It’s meant to take your hand and gently guide you into the genre. By track nine, “More Than You Thought,” Flume hammers the listener with some serious next-level glitch, and the trip down the summit is a graceful one.

Sadly, the journey up the mountain is one fraught with bumps and setbacks, and they exist mainly because of the chipmunk vocals. It almost seems that the shrill vocal bursts only exist to make the last third of the album more enjoyable, since it contains none of the aforementioned affronts.

Tracks five, six, seven and eight pack so many chipmunk vocals you’ll swear Dave Seville produced them. While these samples, along with some other throwaway audio artifacts, are Flume Mountain’s collective yeti menace, he provides you with enough rations beforehand to weather the beast.

Songs like “On Top” are early stars on the record—and aptly titled to boot. If you can tune out the mediocre hip-hop vocal musings, you’ll find a skillfully crafted beat on par with any contemporary producer, seasoned with tasty arpeggiated square waves on loan from a Commodore 64 computer.

Other tracks, like “Left Alone,” feature seasick-Nyquil-fever-dream synthesizers with soulful vocals spilled into the mix. At times, it reminds me of a scaled-back PANTyRAID or edIT of Glitch Mob fame; the only thing missing from the marriage is the goofy name stylization.

Flume’s work contains several veteran touches, like syrupy filter work and great sample choices, and the subtle integration into the first two-thirds of the album is welcomed. However, when “More Than You Thought” cracks off, the record really opens up. The track starts out sounding like a field recording.

Truthfully, if tracks five through eight were all like this, the record would be infinitely stronger. “More” is unquestionably the best song on the record: It’s cobbled together from deep bass cuts, broken percussive samples and vocal splatters that sound straight out of some dusty attic’s 45 collection.

One thing you’ll notice on Flume is that the songs end abruptly, with no flow whatsoever. Even with a gapless playback system in place, you’ll feel pushed, pulled and jerked from one composition to the next.

Some might say that it fits with the glitch aesthetic, but if you’ve ever heard a fan of the harsh noise genre talk about “good noise” versus “bad noise,” you’ll understand how this particular type of glitchiness isn’t exactly a musical styling.

This is certainly one area of Flume’s game that needs stepping up: If he’s ever going to play this stuff live, he’d better learn to mix it together, lest his peripheral vision be forever watching for a shepherd’s crook.

Other elements of the album just seem like bad ideas. “Insane” starts out with a truly captivating vocal melody, but launches into some kind of Tesla Boy-inspired cheeseball synth-pop horse jazz. Had the song been kept as it started—a minimal, breathy piece—it would have worked far better.

It’s easy to tell that Flume intended his debut as one solid movement, with “More Than You Thought” being the apex and nothing else after it attempting to come close. If only he hadn’t littered the path to the top with so many pitfalls, the album would have been more successful.

On the other hand, the smattering of ideas present on this debut is far too big for Flume’s rookie britches. As his career continues, his complicated frameworks will find a home big enough to support them.

letters to the editor