Jill Freeman, media and communication teacher for the department, said, “I was really excited by the number of people who came out to support this. It really shows the commitment PSU students have to the democratic process.”

Dr. Paulsen, chair of the department, was also extremely pleased with the turnout for the event.

Rebeccah Black, who teaches mass communication in society at PSU, said, “This debate took on a whole different dimension than the previous ones. It really brought us back to what the voting and democratic process is really about: congregating.”

For the entire evening, the room remained calm, with the exception of a few outbursts in response to Bush’s performance.

“Bush’s emotional capacity and strength really came out when he talked about family and God, but I think Kerry won on every other issue,” said Dr. Paulsen.

That seemed to be the majority view for the students who attended the events. Many people seemed to favor Kerry’s views on healthcare and moving the United States back into the world community.

“Kerry focused on all of the positive things and Bush only focused on the negative,” said Chris Ortolano, who is not a student, but works as a canvasser for the League of Conservation Voters.

When asked his opinion in regard to the religious issues brought up, student Ben Razari, who was born in England and raised by a Persian father, said, “It is an integral part of America. I think it is dangerous to focus on it, though. If you are going to call it Islamic fundamentalist, why can’t we say Christian fundamentalist?”

“I don’t watch American media, because I don’t think it is a reputable source to base my opinions on,” said debate watcher Heather Lockamy.

The Department of Communication is hoping to have another such event for the elections and is in the process of working out the details. If interested, contact them for information.

After the event, there were enough students left to create 15 separate groups of around 10 people, who, with a moderator, discussed the debates. 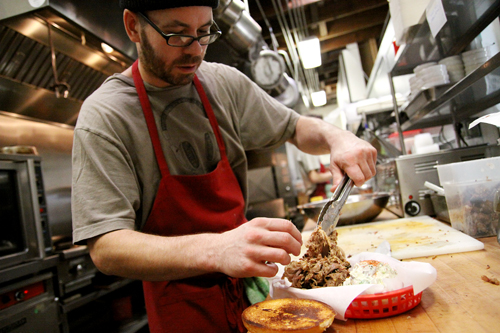