For the past five years, Portland State biology professor Lisa Weasel has traveled the distance to understand the ethical implications of genetically modified (GM) foods. Her new book, published in 2008, is the result of her five-year research.

For the past five years, Portland State biology professor Lisa Weasel has traveled the distance to understand the ethical implications of genetically modified (GM) foods.

Her new book, published in 2008, is the result of her five-year research.

In Food Fray: Inside the Controversy Over Genetically Modified Food, Weasel pays attention to the vast differences in how people respond to modified food crops in the United States versus in Europe or Africa.

“I think it’s really important for people who are trained as scientists to engage in and embrace these kind of ethical implications,” Weasel said. “I focus my academic scholarship in looking at science and technology, and the impacts and how the public perceives it.”

In Zambia, Weasel observed firsthand the food shortage crisis in 2002 when the government refused the U.S. GM food aid; in India, she notice the same attitude toward GM food in rural areas.

“In sub-Saharan Africa there’s a strong concern about the spread of genetically modified crop through cross-pollination and inadvertent contamination,” Weasel said.

The fear of cross-pollination between GM crops and organic crops is one of the major concerns about GM foods.

Weasel said, in Oregon, farmers in the Willamette Valley are suing the U.S. Department of Agriculture over fears that genetically modified sugar beet seeds could contaminate their organic crops through cross-pollination.

One of the purposes behind GM food was the hope that better crop yield could one day end world hunger. During her research in India, Weasel noted that the problem wasn’t lack of food, but distribution.

“The foods can’t get to the people who need it because of a lack of transportation network,” Weasel said. “They have excess food, but there are still people starving.”

In Food Fray, Weasel discusses all of these ethical implications surrounding GM foods from an academic perspective but written for the general population.

According to Weasel, the intent is to inform the public more on the topic.

“I was surprised at how many people are uninformed on the issue, and people have all kinds of misinformation and stereotypes,” Weasel said. “Major industries and corporations are controlling the discourse and the dialogue, so I think that we need to have more public involvement.”

Presently, Weasel said that consumers are particularly unaware of the next wave of biopharmaceutical crops-plants that are engineered to produce vaccines. She called the lack of government requirement for testing and experiments on these crops “shocking.”

Recently, Weasel’s book was selected as the winner at the 2009 Green Book Festival in the scientific category. The contest honors books that contribute to greater understanding of and positive action toward protecting the environment.

“It’s always wonderful to get recognition for these projects that take a long time,” Weasel said. “Many, many years go into the research, and also writing the book is not an easy task either.”

A grant from the National Science Foundation made her work possible. According to Weasel, the grant gives a junior faculty member a long period of generous support to conduct cutting-edge research.

As for the future of GM foods, she expressed hope that some of the realities may change.

“There is increasing consumer awareness and more demand from consumers for organic food in this country, however, I really hope we see more sustainable application of genetic technology in agriculture,” Weasel said.

Weasel hopes the book will educate the public about GM foods and encourage people to be more politically active.

“Write to your government representatives, elected officials; let people know what the concerns are,” Weasel said. “Also be a proactive consumer as well, and pay attention to how the foods are produced, and think about the impacts on your health, the bigger environment and economy.”

Online exclusive: He’s on the rag 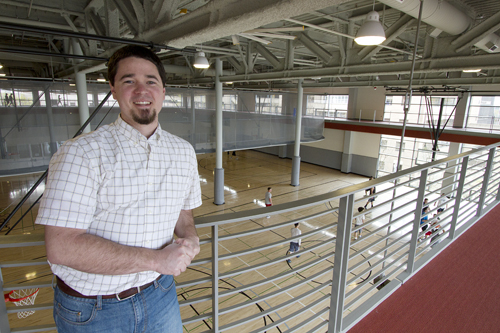