Richard Jarvis, chancellor of the Oregon University System (OUS), held a “town hall” meeting at Portland State on Friday. He outlined his plans for assuring funding for the university system in the coming years.

PSU was the second campus Jarvis has visited in a series of “town hall” meetings called “What’s the Big Deal?” Oregon State University was the first campus, and he plans to visit the five other campuses.

“I think you lose students whenever you make it a big deal to go from high school to a university,” he said.

With this in mind, Jarvis intends to eliminate the divisions between different institutions with a “seamless K-20” system that encompasses high schools, community colleges and universities.

“It shouldn’t matter to students where they get the credits,” Jarvis said. “That’s bookkeeping.”

Attendees cited that the state Legislature’s focus on K-12 in the past has been at the expense of university funding. Jarvis responded, “Don’t give up.”

“There is nothing about a 10 percent cut that makes sense. It’s crazy,” Jarvis said. And that’s exactly what the university system has had to deal with so far this biennia. OUS universities are currently dealing with a 6 percent reduction in base appropriations; if an income-tax surcharge doesn’t pass in January, the university system will face an additional 4 percent cut.

“We’re just not getting enough state funding,” Jarvis said. His idea is to instill in Oregon universities a sense of entrepreneurship and give them more flexibility with tuition.

ASPSU President Kristen Wallace voiced concerns that the students’ ability to present a unified voice to the Legislature will be diminished if schools are allowed to set their own tuition rates.

“They could go to the board,” Jarvis said. The OUS board could present the students’ concerns to the Legislature in session. “You’ll always be able to lobby the Legislature,” he continued. “I understand that we come at the budget from two different points of view. We [the Oregon University System] have to look at the whole budget.”

Jarvis said finding new ways to fund higher education is going to be necessary since the OUS is expecting to add enrollment numbers equivalent to adding another campus the size of Oregon State University. That expectation makes the current downtrend in state funding an even more important problem for Jarvis to address.

According to OUS figures, Oregon is falling behind its peers in funding higher education. In 1999, Oregon’s state-general-fund support was 89 percent of the national average. In 2002, that fell to 77 percent. And now, if current shortfalls are met by program cuts, it will fall to 74 percent.

The PSU “town hall” meeting left Jarvis with new ideas and a better idea of where PSU is coming from. Jarvis said that the PSU meeting had “more of a campus feel” to it than the OSU meeting did, and he was encouraged by the response he received. Jarvis said, “They’re not sitting here listening to some suit on a Friday afternoon because they’re uninterested.”

One idea offered by an audience member that Jarvis particularly liked was the notion of setting up a reserve fund to smooth out higher-education funding from year to year. “I’d much rather be the ‘reserve-fund new guy’ than the ‘tax-hike new guy’,” Jarvis said.

Jarvis was selected as the 11th chancellor of the Oregon University System in May 2002. 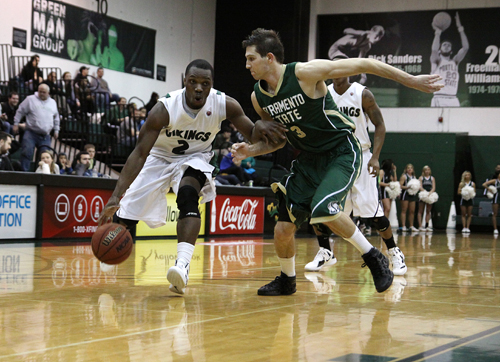 The college that would not die