This year marks the 40th anniversary of the Korean language program at Portland State—the oldest formalized program of its kind in the state of Oregon.

This year marks the 40th anniversary of the Korean language program at Portland State—the oldest formalized program of its kind in the state of Oregon. 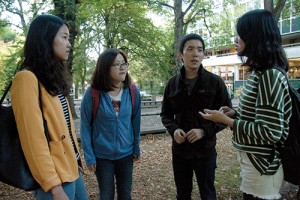 Students Heekyeong Na, Inyoung Kim, Jaeyoung Kim and Yeonju Cha (left to right) hang out in the Park Bocks. They’re exchange students from South Korea at PSU for one year.

The program’s growth over four decades has been strong and steady, said Katherine Morrow, programs administrator for the Office of International Affairs.

“Recently, there has been a strong and steady growth with the PSU Korean program,” Morrow said.

New classes are being added to the curriculum and grant funding is trickling in.

“We are seeing that the students, and even the American public in general, are taking a strong interest in Korean culture and affairs,” Morrow said. “This massive interest is so timely with Korean development and internationalization.”

Shifting to a focus on Korea, the university has stepped up its recruiting focus to bring more Korean students to the university.

After Korea’s economy normalized in 2000 (after the Asian financial crisis of 1997) the number of Korean students studying at PSU increased. Approximately 100–150 students from Korea study at PSU each year, making it the sixth-largest international student group at PSU, following Saudi Arabia, China, India, Japan and Vietnam.

Last spring there were 106 international students involved in the Korean studies program. On average, there are eight to 10 visiting scholars teaching classes at PSU every year.

YeonJu Cha is one of four exchange students from three universities in South Korea who are at PSU for a year-long stay. She said PSU’s appeal had to do with its unique makeup of students.

“Because the model of PSU is diversity,” Cha said.

Korea is large on the university’s radar. In August, PSU President Wim Wiewel attended a seminar in Seoul sponsored by the South Korean government. Many delegates came from universities around the world to do admissions recruiting.

Wiewel also used the opportunity to discuss the development of an official Korean studies department at PSU.

“The opportunity to study Korean language and culture is important in its own right, simply as a further way for PSU students to understand the rich cultural diversity of our world. In addition, Korea is an important economic partner for Portland; the Port of Portland is where most Hyundai cars are brought into the U.S.  Also, there is a sizable Korean community here,” he said.

Since Wiewel’s August visit, the curriculum has been growing.

Recently, the Oregon Korea Foundation, which provides resources for the local Korean community, issued a grant of $7,300 to PSU for the creation of a new Korean pop culture class to be offered in winter or spring next year. A new Korean film class will also appear in the curriculum.

These upcoming additions to the program are direct responses to a growing demand.

While there is a great degree of support from within the institution, Korean relations at PSU are largely threaded together by the eagerness and proactive involvement of the students and community members—many of whom are not Korean.

“The Korean Student Association is one of the largest and most involved student groups on campus,” Morrow said. “We started seeing much more activity in 2006, when a newly formed KSA stepped in and reorganized the annual Korean Night that takes place every spring in the Smith Memorial Student Union Ballroom. Ever since then it has been a growing success.”

The KSA puts on such a high-quality Korean Night event that it actually turns out to be one of the largest Korean cultural events in the greater Portland area, she said.

“It has been a sellout event for the past four years,” Morrow said. “It is remarkable that what has germinated at the student level has come to serve the need of the greater Portland community.”

Wild dogs in the city streets