Portland State students taking a break from studying might find themselves browsing the Dark Horse Comics collection on the fourth floor of
Millar Library. 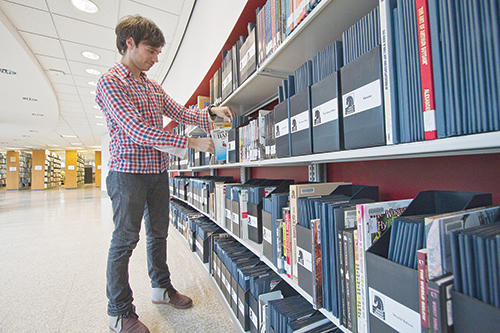 Portland State students taking a break from studying might find themselves browsing the Dark Horse Comics collection on the fourth floor of
Millar Library.

Mike Richardson, founder and president of the Milwaukie-based comic book company, hopes so.

“I was an art major [at PSU] and I was very influenced by some groundbreaking artists at that time,” Richardson said. “If I [had] had more ease in accessing comics, it would have been a great advantage to me as an art student.”

John Bartolomeo, a student worker in the library stacks, is more than happy to recommend parts of the Dark Horse collection to unfamiliar readers.

“Have you read Wondermark?” Bartolomeo asked, his eyes lighting up as he pulled the hardcover volume by David Malki from the shelf. This particular comic, he said, was created from woodcuts and engravings.

Talks began among PSU’s librarians in 2005 to set up a research collection of Dark Horse comics, graphic novels and other merchandise in the library, as well as a circulating library of everything Dark Horse has published.

Michael Bowman, PSU’s comics librarian, was involved in talks about the collection, along with Helen Spalding, Portland State’s university librarian at the time. He said that the negotiations took until fall of 2008 to settle.

As to the task of keeping the Dark Horse collection circulating, Bartolomeo mentioned that he’s found a surprising number of Bettie Page comics in the men’s room. However, the most popular type of comic in the collection is anime, he said.

Bowman noted that the collection’s placement, on the curves of the library, often means that students who are studying or want a break from what they’re working on happen upon the materials.

In the last two years, Bowman said, materials from the collection—which includes about 8,000 items—have been checked out more than 4,000 times.

To bring the collection more traffic beyond recreational readers, Bowman and Richardson both hope that the university will do more to incorporate the collection into the PSU curriculum.

When he was a student at PSU in the ’70s, Richardson said that most people within academia held comics in low estimation.

“People would raise an eyebrow if you were to buy [comics],” he said. “They were seen as not being literary enough to be taken seriously.”

Richardson said that, as a student, he would make sure to buy his comics in bookstores where he knew he wouldn’t be recognized.

He lamented that American comics have been underrepresented among historians and librarians until
recent years.

“This is a very American art form,” he said. “[Comics] have great authenticity as a storytelling form.”

Up on the fourth floor of the library, this art form will remain available indefinitely to visitors, whether they read the comics with a mind for seriousness or for pleasure.