It’s okay to ask questions—even when you don’t have the answers. And Sona Andrews, Portland State’s new provost and vice president for academic affairs, has plenty of them. 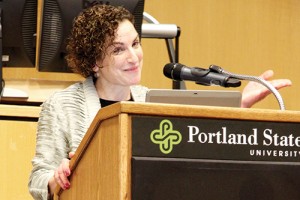 It’s okay to ask questions—even when you don’t have the answers.

And Sona Andrews, Portland State’s new provost and vice president for academic affairs, has plenty of them.

Questions for students, questions for faculty and even questions for PSU President Wim Wiewel.
Andrews posed those questions—even asking herself a few—on Wednesday at the annual convocation held at PSU’s Hoffmann Hall.

“I’ve made it abundantly clear that I don’t have any of the answers,” Andrews said. “We need to look into the future to find them. It’s not going to be easy.”

Andrews hopes to spark a discussion in the PSU community. She hopes to see faculty asking questions and students getting involved.

“One thing students can do to help us is be engaged in conversation,” Andrews said. “Students are the best to be able to tell us what they need to be able to learn.”

Andrews said that nothing is more exciting to herself and other staff than to engage themselves and create discussion about how to help students be able to better their education.

Over the past four years, Wiewel has been the main speaker at the convocation, but this year he was happy to pass it along to Andrews.

“I’m thrilled to turn to Sona and to ask her to be headliner for this convocation,” Wiewel said. “I’m looking to Sona, as provost, to take on this leadership role as an academic leader.”

Andrews focused on how education is changing and how the changes affect all aspects of the PSU community.

The latter half of Andrews’ speech was about massive open online courses, or MOOCs—free online courses open to any student who signs up for them. MOOCs are taught by a large number of well-known universities, including Stanford, Yale and MIT.

In an interview after the speech, Andrews discussed how changes in higher education present a need for a new way of measuring what someone has learned.

“Do we do that by testing? Classes? E-portfolios, where students round up and present the work they’ve done?” Andrews asked. “Sitting in a class and receiving four credit hours may not be the only way to show learning.”

Hudson said she enjoyed hearing about how PSU plans to work with the idea of online learning and the bigger issue of MOOCs.

Sarah Ensor, an audience member and new English instructor, said that she was delighted to attend the convocation.

“It’s great for students to know how many faculty were here and are committed to PSU,” Ensor said. She believes this shows that people here are really trying to put the needs of students first.

Several awards were given at the convocation highlighting the achievements of university faculty and staff: