Not many people get an opportunity to sit down with Mayor Sam Adams and tell him about an embarrassing moment in their lives, but on Thursday night, 14 students got to do just that.

Not many people get an opportunity to sit down with Mayor Sam Adams and tell him about an embarrassing moment in their lives, but on Thursday night, 14 students got to do just that. 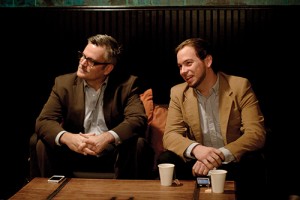 Mayor SAM ADAMS and Brian Forrester, the social science senior who created the event, chat informally with a small group of students at Thursday’s Dialogues After Dark event.

Adams was this month’s speaker for Dialogues After Dark, an event series that aims to connect students with civic leaders in a comfortable environment.

“Rather than facilitate a lecture or a Q-and-A, I wanted to create a dialogue,” said Brian Forrester, a senior social science major and creator of the event.

“My goal is to cultivate an environment conducive to the exchange of ideas,” he said.

Forrester’s theory is that if he can bring students and civic leaders together in a space where “no grown-ups are allowed,” as he put it, everyone will feel more comfortable and willing to engage in conversation.

“Even if we got [President] Barack Obama to come, [PSU President] Wim [Wiewel] isn’t invited,” he joked. “For tonight, I’ve asked Sam to take off his politician hat.”

Forrester said the series is still a work in progress and he’s learning as he goes, but he was pleased that all seats were filled at the Contrary on Thursday evening.

The cafe, located on Southwest Fifth Avenue and Hall Street, has been allowing Forrester to host the event in its space afterhours, providing free tea and coffee to attendees.

In the intimate space, surrounded by eclectic paintings, students formed a half-circle to face the couch where Adams and Forrester sat.

Forrester introduced the event and himself before asking students to go around the circle and share their names, majors and an embarrassing moment, just to break the ice, he said.

Embarrassing moments out of the way, Forrester began by asking Adams a few questions of his own.

“If you could go back in time and sit across from yourself as a 21-year-old, what words of wisdom would you have?” 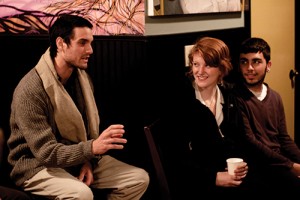 Adams said he’d tell himself to not be afraid of whatever it is he’s afraid of and give himself plenty of reassurance, which continued to be a consistent theme throughout the event.

“At that age, it was my own misgivings and my own anxieties that were holding me back—not anybody else’s,” Adams said.

Throughout the evening, Adams answered questions from students and, in some cases, asked questions of his own.

Halfway through, questions about how Adams’ sexual identity plays out in his politics came up.

As the first openly gay mayor in the U.S., Adams said he ignores hateful responses to his sexuality.

“It only gives them oxygen,” he said. “It’d be nice to blast them, but I don’t because they just want that reaction.”

Adams recalled an event that took place while he was campaigning for mayor in which he was asked what it’s like to be gay.

“I responded with, ‘It’s all right,’” he said. “The next day, headlines read, ‘Gay candidate has normal, boring answer.’”

At the end of the event, Adams made a point to shake everyone’s hand and thank them for coming, recalling names as he said his goodbyes.

Adams said he was happy to be a part of the event, and noted the importance of dialogue in a less-formal setting.

“Take over Portland; I’m retiring,” he told the group of students as he went out the door.

Louis Maltese, a philosophy major, said he was really pleased with how the event allowed people to actually interact with Adams.

“I was at a City Club meeting, and it was terrible,” he said. “You were just listening to people talk.”

October’s dialogue event, which featured Northwest Health Foundation’s founder, Thomas Aschenbrener, filled half of the available seats; Forrester attributed the poor turnout to the timing of the event, which fell right around midterms.

The next Dialogues After Dark event will be in January, but the exact date is yet to be decided. Nan Waller, Multnomah County’s presiding judge, will be the speaker.

The secrets of dance therapy

Pearls in the rough